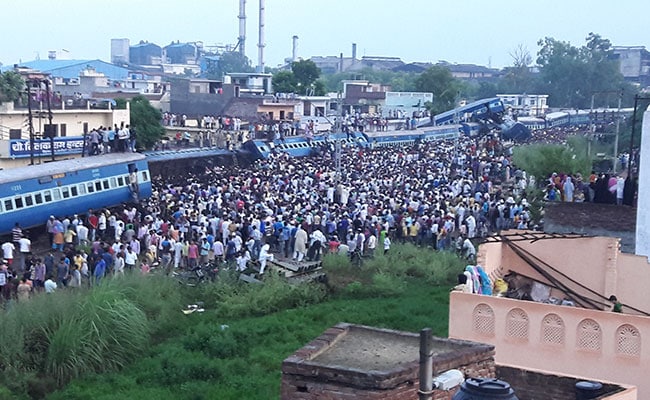 The derailment had such a massive impact that one of the train's sleeper coaches climbed onto another.

Muzaffarnagar: Trains passing through the Meerut line of the Northern Railway have been either cancelled or diverted till 6 pm today, in the wake of the tragic accident at Khatauli in Uttar Pradesh, a senior railway official said.

The sleepy town of Khatauli, about 100 kms from Delhi, became the epicentre of rescue operations yesterday after 13 bogies of the Puri-Haridwar Kalinga Utkal Express derailed near its station, killing at least 22 people.

"All services on Meerut line, on which the Khatauli falls, have been either cancelled or diverted through other routes till 6 PM, as the tracks are yet to be cleared of mangled train coaches," DRM of the Delhi Division, R N Singh told PTI.

Delhi Division falls under the Northern Railway Zone, which administers some of the busiest stations in the country.

"The train had 23 coaches out of which 13 had derailed. It was running at a speed of about 100 kmph when the accident took place," he said.

Singh said the diverted trains would run through Shamli till the restoration work is over.

The train suffered huge damage in the accident last evening at Khatauli, around 40 km from Muzaffarnagar, which Singh described as "very grave".

The derailment had such a massive impact that one of the train's sleeper coaches climbed onto another, while its other end rammed into a house, shattering its facade, and leaving its occupants terrified.

Two of the sleeper coaches overturned, with one of them hitting the facade of a local college in Muzaffarnagar.

Bodies of two men and as many women were pulled out by the NDRF team, which worked from nearly 9 pm last night till 3 AM, to rescue survivors or extricate bodies with due dignity.

Asked about the allegation made by several locals and some passengers that "maintenance work" was underway when the accident happened, the DRM said, "It was just some routine work. And, the railway minister has already ordered an inquiry. So, let the report come, I cannot say, anything more on that."

The injured have been taken to hospitals in Muzaffarnagar and Meerut and both the railway and the local administration have issued helplines.

Angements of Buses has been done for the clearance of the stranded passengers & for any further detail contact following Helpline no pic.twitter.com/86AirnBLyp