Universities Not Ivory Towers, They Are Part Of Society: President Kovind

The academic community should be engaged in research in areas that create not only a new knowledge base but also one that sustains human society, President Kovind said. 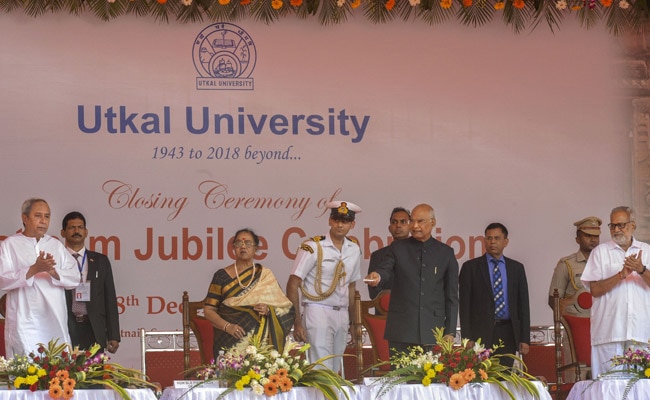 President Kovind was addressing a ceremony of the Platinum Jubilee celebrations of the Utkal University.

President Ram Nath Kovind on Sunday said that universities are great hubs of ideas but not ivory towers, and should act as agents of social change.

The academic community should be engaged in research in areas that create not only a new knowledge base but also one that sustains human society, the President said.

President Kovind was addressing the valedictory ceremony of the Platinum Jubilee celebrations of the Utkal University.

Environment, health and education should be taken up vigorously and institutions like Utkal University that are endowed with multi-disciplinary faculty are better equipped to undertake this task, the President said.

"Education is the best tool of social empowerment. I am not only a passionate advocate of this belief, but stand before you as a proof of it too. Universities are great hubs of ideas, but they are not ivory towers. They are part of society and thus remain engaged with social change," President Kovind said.

Advocating the spread of Mahatma Gandhi's core value of ''Ahimsa'' among people, President Kovind said, "In a time of violence, intolerance and strife, it is our duty to remind everyone, especially the young, of the core values that Gandhiji lived for and died for."

The President said, the world has started taking note of the richness of the country''s ancient knowledge systems and varsities need to harness this with Utkal University taking the lead in this regard.

"One can study a lot of scriptures and still remain a fool. The real scholar is one who puts his or her learning into practice. So in your quest for knowledge, never forget to put it into practice in the world around you, and improve with your intellect," the President told the gathering.

As Utkal University celebrates completion of 75 years of its existence, President Kovind said, it is time to take stock of its achievements and the areas where further improvements are possible.

"I am confident that the university will remain committed to playing a significant role in higher education and research, nationally and globally," he said.

The President also called upon the Utkal University alumni to consider creation of an endowment fund to be used for development of infrastructure and establishment of centres of excellence.