P Chidambaram held the government responsible for India slipping 10 places in the global democracy index, saying that "those who are in power" are the real "tukde-tukde" gang. 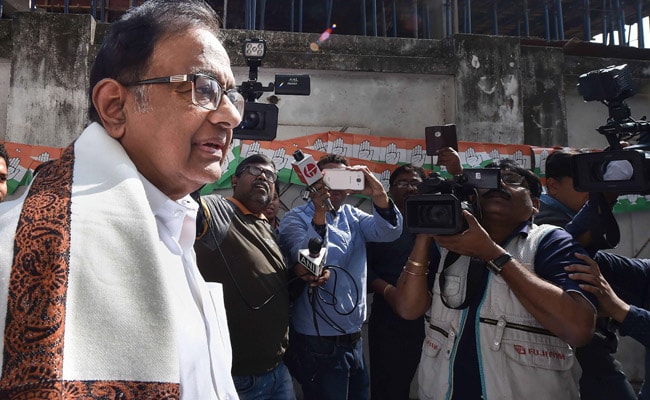 "...those who are in power are the real 'tukde-tukde' gang," P Chidambaram had said,

Union Minister Dharmendra Pradhan hit back at senior Congress leader and former Union Minister P Chidambaram after the latter's attack of the centre on Thursday over India slipping 10 places in the global democracy index.

"Chidambaram recently came back from jail on charges of theft... the country knows what kind of work was done in Chidambaram's time. People like P Chidambaram, who went to jail after ''Chindi Chori''(petty theft) will always have trouble with people who are following the rules and regulations," Mr Pradhan told news agency ANI.

Mr Chidambaram had accused the government of undermining the country's constitutional institutions and chipping away at its democratic values over the last two years.

"India has slipped 10 places in the Democracy Index. Anyone who has closely observed the events of the last two years knows that democracy has been eroded and democratic institutions have been debilitated those who are in power are the real 'tukde-tukde' gang," P Chidambaram tweeted on Thursday.

Anyone who has closely observed the events of the last two years knows that democracy has been eroded and democratic institutions have been debilitated those who are in power are the real 'tukde tukde' gang.

India dropped to the 51st position in the Democracy Index 2019 - a list of the most and least democratic countries in the world - said The Economist Intelligence Unit, a news and general affairs publication, in its annual report, released on Wednesday.

"The primary cause of the democratic regression was an erosion of civil liberties in the country," The Economist said in its report, adding, "The passage by Parliament in December of the discriminatory Citizenship (Amendment) Act suggests India's decline will continue in the 2020 index".

Earlier this week, Union Home Ministry said there is "no information concerning tukde-tukde gang", responded to a query under the Right To Information Act (RTI), an activist claimed. NDTV has no independent confirmation of activist Sanket Gokhale's claims. "Tukde-tukde gang" is a term often used by right-wing parties to attack the Left-backed groups and their supporters.

P Chidambaram, 74, was released on bail last month after spending 106 days in custody in the INX Media case.

The government says the CAA will help non-Muslim refugees fleeing religious persecution from three Muslim-dominated neighbours. However, opposition parties and activists say it discriminates against Muslims and violates secular tenets of the Constitution. Critics fear that the CAA, used in conjunction with the NRC, will target Muslims.