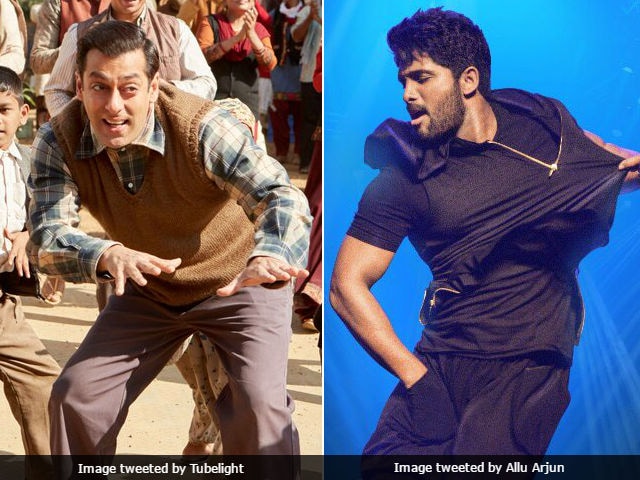 New Delhi: Everyone's excited to watch Salman Khan's Tubelight, which hits the screens today, and so is Telugu actor Allu Arjun, whose Duvvada Jagannadham (DJ) also releases today. The 34-year-old actor told Indian Express that he is not worried about DJ vs Tubelight and hopes that moviegoers would enjoy the best film. "First thing is I'm never worried about anything. I wish Tubelight all the best. I want the best film to be watched, even if it's mine," he said. Allu Arjun's co-star Pooja Hegde (Mohenjo Daro's Channi) told Indian Express: "I think that both films will do well because there are different audiences and it's a long weekend. So whoever watches Tubelight, will also watch DJ. So I don't see any challenge over there."

Duvvada Jagannadham is written and directed by Harish Shankar, who has earlier made films like Gabbar Singh and Subramanyam For Sale. The film, which also stars Rao Ramesh as the main antagonist, got a wide release in Tamil Nadu, Karnataka, Telangana and Andhra Pradesh, according to the Indian Express report.

Watch the trailer of Duvvada Jagannadham:

Meanwhile, Salman Khan's Tubelight has spread its wings in the northern region and is also for the biggest opening for a Bollywood film in USA, across 1,200 screens. Salman Khan's film is set against the backdrop of the 1962 India-China war. The Kabir Khan-directed film also stars Chinese actress Zhu Zhu, child artiste Matin Rey Tangu, late actor Om Puri and Shah Rukh Khan in cameo.

Watch the trailer of Tubelight:

Tell us which film you're watching over the weekend in the comments section.