After Silbhadra Dutta declined to talk to officials of the Indian Political Action Committee (I-PAC), which is looking after the party's campaign strategy, the TMC's North 24 Parganas district president went to the residence of Dutta but could not meet him as he was not at home. 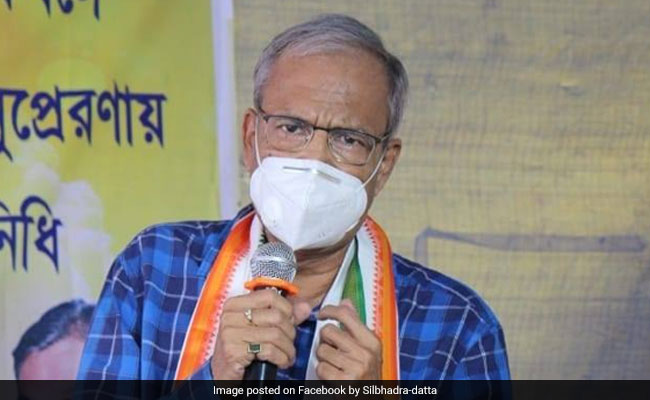 Silbhadra Dutta said that TMC leadership should have been more pro-active in redressing his grievances.

Amid the ongoing speculation over the next move of disgruntled Trinamool Congress MLA Suvendu Adhikari, the party on Tuesday tried to reach out to another legislator Silbhadra Dutta who has expressed his desire not to fight polls, but the emissaries failed to talk to him.

Mr Dutta said that the TMC leadership should have been more pro-active in redressing his grievances.

After he declined to talk to officials of the Indian Political Action Committee (I-PAC), which is looking after the party's campaign strategy, about organisational matters, the TMC's North 24 Parganas district president went to the residence of Mr Dutta but could not meet him as he was not at home.

The I-PAC is the organisation of poll strategist Prashant Kishor.

"They had come to talk to me. I told them I would not discuss organisational matters with them. It is not possible for me to take directions from a private agency on how politics or organisational work should be done," the two-time TMC MLA from Barrackpore said.

"Later, our district president Jyotipriyo Mullick called me up and expressed his desire to visit my place. Isaid he is welcome. But I would not change my decision on not to contest polls," Mr Dutta said.

When asked whether he had informed the leadership of his grievances, the TMC leader said that the party is aware of everything but nothing has been done to redress them.

"It would have been better if the party was more pro- active in addressing the problems, instead of sitting over it," he said.

Mr Mullick, who is also a minister in the state cabinet, went to Mr Dutta's residence to meet him.

"Both of us are friends since college days. I have come to meet my friend and discuss the issues that are bothering him," he said.

However, he failed to meet Mr Dutta who was not present at home.

Meanwhile, echoing Suvendu Adhikari who resigned as minister in the Mamata Banerjee cabinet on Friday, another senior TMC leader Madan Mitra said he does not have a capsule lift at his home.

"In the TMC, everybody is now sitting in the green room. Everybody is trying to remove their make-up. But I am not ungrateful. At the same time, I want to say one thing, that I don't have a capsule lift at my home," Mr Mitra, a former minister, said.

Mr Adhikari had earlier said that he rose in political life by walking up every step and has not landed from the top in a parachute or used a lift to move upward.

It is not just Mr Adhikari who is troubling the TMC top brass, as several other MLAs and senior leaders have also openly spoken against the leadership, something which was unthinkable even a few years ago.

Many of them have directed their anger towards Prashant Kishor and his team -- hired by the party to strengthen its poll prospects.