Given recent "unfortunate events", it's time to close ranks and strengthen the party, he said on Twitter, suggesting there would be no more additions from the G-23 to the already chaotic contest. 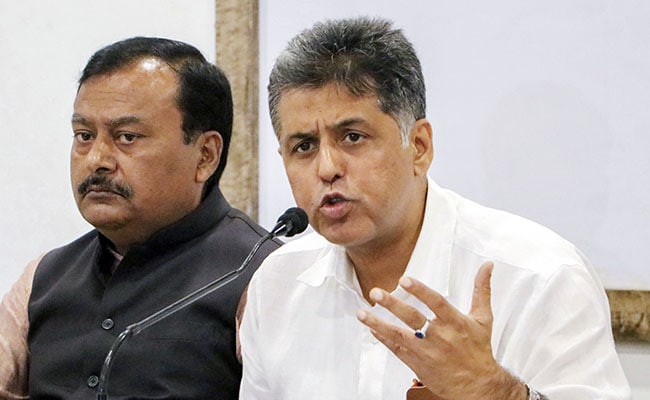 Nominations for the Congress President poll will close at 3 pm today.

Manish Tewari, senior Congress leader and part of the 'G-23' group of dissenters, today bowed out from the contest for the President of the grand old party following speculation that he would be the second candidate from the camp after Shashi Tharoor to throw their hat in the ring. Speaking to NDTV, he said he doesn't want to become the 'fall guy'.

He also tweeted his decision to opt out. Given recent "unfortunate events", it's time to close ranks and strengthen the party, he said on Twitter, suggesting there would be no more additions from the G-23 to the already chaotic contest.

Given recent unfortunate events it's time to close ranks & strengthen @INCIndia recalling wise words of @CitiznMukherjee & work for a Consensus & effective Presidency," he said, while sharing a quote from former President of India Pranab Mukherjee on why the top party post must be offered and not sought.

Leadership,Ideological clarity,narrative & transparent access to resources are pillars of ‘A' political party

The Congress President election, nomination for which ends at 3 pm today, is certain to be a direct contest between the 'official' candidate Mallikarjun Kharge and Shashi Tharoor, who was the first to express a desire to run for the election.

Senior party leader Digvijaya Singh decided not to file his nomination minutes after meeting with Mr Kharge, who is said to have the blessings of the Gandhis.

Congress veteran KC Venugopal, a key aide of the Gandhis, last night conveyed to Mr Kharge the high command's decision for him to join the race despite the Gandhis saying that they would remain neutral, sources said.

Former Haryana Chief Minister Bhupinder Singh Hooda, a key member of the "G-23" group of dissenters who had shot off an explosive letter to Mrs Gandhi in 2020 over organisational changes in the party, has also backed Mr Kharge's candidature, said sources.

Mr Kharge will resign as the Leader of Opposition in Rajya Sabha in accordance with the 'one person one post' rule decided by the party earlier this year, said sources.

The October 17 election took a chaotic turn after Rajasthan Chief Minister Ashok Gehlot's loyalists staged an open rebellion against the possibility of Sachin Pilot replacing him if Mr Gehlot, backed by the Gandhis, was made elected President.

Mr Gehlot met Sonia Gandhi yesterday with an apology letter and opted out of the contest for the top party post. He told reporters he won't contest the election taking "moral responsibility" for the public rebellion by his loyalists.