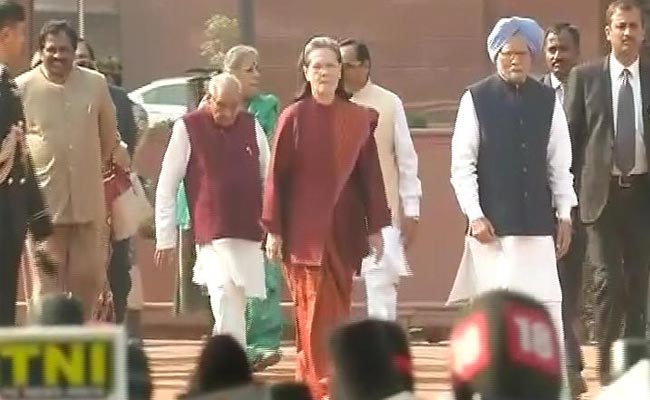 Congress's attempt to unite the opposition over notes ban is falling apart.

New Delhi: The Congress's attempt to extend the unity of opposition parties over the notes ban outside parliament with a meeting and joint press conference addressed by its party chief Sonia Gandhi in a rare appearance, is falling apart, with the Left and Nitish Kumar's Janata Dal (United) reportedly RSVPing their inability to attend. Sharad Pawar's Nationalist Congress Party is also disinclined.

Sonia Gandhi has invited opposition parties across the board and the Congress hopes for a big show of strength in its attack on Tuesday on the Modi government and demonetisation, after leading at least 14 parties in a united protest in parliament during the winter session, washed out by continuous disruptions.

But the Left's Sitaram Yechury said it was not as simply done as extending floor coordination in parliament to a coming together of parties on a platform outside. "All opposition parties to have joint consulted action in the country. I don't want to push a blame on anybody but what I would like to say is that success of any such united opp activity always depends on prior consultations."

Promoted
Listen to the latest songs, only on JioSaavn.com
Janata Dal (United) leader KC Tyagi said his party had not yet decided whether to attend or not, but said it would first like to know what the agenda was. Mr Tyagi said no "common minimum pogramme" had been decided on and pointed out that all opposition parties do not have the same stand on PM Modi's ban on 500 and 1,000 rupee notes, aimed at eliminating corruption and black money.

He said that while Mamata Banerjee's party is opposed to demonetisation, the JD(U) has supported the Modi government on the notes ban and its intent, but has "raised the problems caused to farmers and small traders" by the massive cash crunch that has followed.