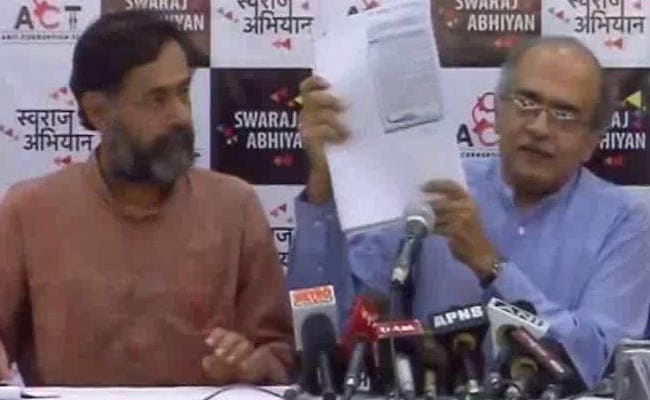 Yogendra Yadav and Prashant Bhushan had formed Swaraj Abhiyan after their expulsion from Aam Aadmi Party.

New Delhi: Swaraj Abhiyan leaders Yogendra Yadav and Prashant Bhushan today announced launching of a political party by October 2 to provide an "alternative political vehicle" even as they hit out at AAP, saying it has a "supremo" culture.

The political party will be launched by October 2 and a six-member committee has been formed for this purpose, Mr Yadav said.

Addressing the concluding session of a two-day Abhiyan national convention in New Delhi, Mr Yadav said, "We were never secretive about going political. A decision to launch a political party was taken with nearly 93 per cent of the delegates at the convention overwhelmingly supporting it.

"Of the 433 delegates, 405 voted in favour of launching the party," he said, amidst chanting of slogans 'Vande Materam','Inquilab Zindabad' and 'Bharat Mata ki Jai' by the volunteers.

Mr Yadav, however, clarified that Swaraj Abhiyan will continue to exist even after the new political party is launched. Although the decision to launch a party has been taken by the delegates, the two will function independently.

The duo, however, parried questions on whether the new party will contest the Assembly elections in five states, including Punjab, which are going to polls next year.

Mr Yadav and Mr Bhushan were sacked from AAP in April last year for "anti-party" activities. They had hit out at AAP chief Arvind Kejriwal questioning his "supremo style of working" and "lack of transparency" in the party.

"Even if we are championing clean politics, people will not vote for us unless they feel we can win elections. This was precisely the case with AAP. It took birth out of movements like India Against Corruption, Janlokpal and these helped get public support.

"We should fight elections when we have done enough groundwork, be visible so that people can identify with us. We should contest polls only when we think we can win," Mr Bhushan said.

Mr Yadav, however, said this does not mean that it will not contest polls at all.

"We will look for alliances, but that will be only with people's movements or party that have taken birth from such movements," he said.

Suspended AAP MP Dharamvira Gandhi was present at the event, but he left before the announcement of launching of a party was made.

"I am not a part of this (Swaraj Abhiyan) political party. I have extended my support to alternative politics, which is not a forte of any single political party. Anyway, I have been suspended by the AAP," Mr Gandhi said.

He, along with another party MP Harinder Singh Khalsa, was suspended by AAP for aligning with Swaraj Abhiyan. Elaborating about functioning of the new outift, Mr Yadav said it will not repeat the mistakes which the AAP made and ensure transparency.