Sushmita Sen And Daughters Have Moves Better Than Jagger. Watch Them Dance

"Another song that's been on repeat. Alisah, Renee and yours truly living in the moment, learning to be light on our feet and strong in our stance," Sushmita Instagrammed 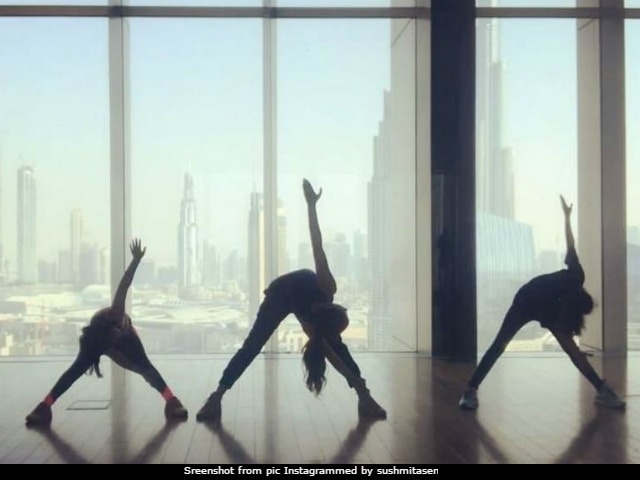 Sushmita Sen and her daughters dancing to Despacito (courtesy sushmitasen47)

New Delhi: Sushmita Sen and her daughters Renee and Alisah are back on Instagram and back with a bang! In a video Instagrammed by the former beauty queen on Wednesday, the mother and daughters trio can be seen grooving to the tunes of the chartbuster track Despacito. Well, enthu-cutlet Alisah can be seen adorably struggling to match steps with Sushmita and her sister Renee while they dance in coordinated sequences. Alisah features in many of Sushmita's dance videos. If you remember, in a video posted earlier, Alisah was unable to keep pace with Sushmita and had hilariously abandoned the dance floor to cuddle her mother while she was still at it. Meanwhile, this is what Sushmita wrote while sharing the new video: "Another song that's been on repeat. Alisah, Renee and yours truly living in the moment, learning to be light on our feet and strong in our stance!!! Love how we #saunter and move to our own beat!!! "Music brings it in, dancing let's it out."

Sushmita, 41, Renee, 16, and Alisah, 7 a glass-walled dance studio with some Despacito magic =

#despacito another song that's been on repeat Alisah, Renee & yours truly...living in the moment, learning to be light on our feet & strong in our stance!!! love how we #saunter and move to our own beat!!! "Music brings it in, dancing let's it out" #stretch #exhale #livefree #holidays #dubai #home #gym #memories #sharing #love mmuuaah

Here's Sushmita and Alisah (sort of) setting the stage on fire to Ed Sheeran's Shape Of You.

#frameofmind there is a song I love by #leeannwomack "when you get the chance to sit it out or dance, I hope you dance" these moments (be it around my #friends or my #babies ) are a wonderful reminder that each time a situation suggested to "SIT IT OUT"...WE CHOSE TO DANCEmoving to our own beat #anytime #anywhere #anyhow Alisah with breaded hair owns her moves#toocute Renee saunters down the beach celebrating life with #maa #memories #cherished #happiness #sharing I love you guys!!! #ihopeyoudance #edsheeran #shapeofyou

Sushmita's Instagram also offers a glimpse of her travel diaries:

Look we found #mom travels & holidays begin The new #campaign out for #milano #waterpurifier all over #dubai Renee n Alisah strike a pose with their mom beyond cute these two!!! #fun #memories #holidays #love mmuuaah

Sushmita Sen, who won the Miss Universe title in 1994, recently judged at the beauty pageant held in the Philippines. Sushmita made her acting debut with 1996's Dastak and has also starred in films like Biwi No 1, Sirf Tum, Maine Pyar Kyun Kiya? , Main Hoon Na and Filhaal.