Section 497 found on the concept women loses her individuality once she is married, the bench said. Adultery will remain a ground for divorce, the bench added.

The Supreme Court delivered an unanimous verdict with all the five judges concurring  on a crucial 150-year-old adultery law that considers punishment only to a man and not a married woman for an affair by treating her as a victim and not as an abettor of the offence. "Adultery law arbitrary," said the Chief Justice of India, Dipak Misra. Section 497 deprives women of dignity and that women are treated as property of her husband. The court said any provision treating women with inequality is not constitutional and it's time to say that husband is not the master of woman. Adultery will remain a ground for divorce, the bench added.

The centre had, in its defence, claimed that the law should remain valid as it protects the sanctity of marriage. The petition filed against the law was done so on the premise that the law does not treat men and women equally.

A five-judge constitution bench, headed by Chief Justice Dipak Misra, had reserved its verdict in August. The hearing in the case by the bench, which also comprised justices R F Nariman, A M Khanwilkar, D Y Chandrachud and Indu Malhotra, went on for six days and had begun on August 1.

Here are the updates of the Supreme Court verdict on Adultery law:

The Supreme Court on Thursday decriminalised adultery after striking down a British era law -- Section 497 of the Indian Penal Code -- terming it as unconstitutional, archaic and manifestly arbitrary.

"Even 20 years ago, I have said the law should be struck down as it is sexist. It was, no doubt, an archaic law. In today's time, the law was irrelevant, especially when many marriages were broken and divorces take years to happen," she said.

"It was much needed the law is struck down. We have even legitimised live-in relationships and after that is legitimised, how can you question adultery.

Social activist Ranjana Kumari too welcomed the judgment, saying "patriarchal control over women's body unacceptable".
Sep 27, 2018 14:12 (IST)
The Supreme Court had upheld the legality of the crime in 1954, arguing that in adultery "it is commonly accepted that it is the man who is the seducer, and not the women".
Last year, in response to the petition challenging the law, the court had said it treats a woman as her husband's subordinate and time had come for society to realise that a woman is as equal to a man in every respect.
Sep 27, 2018 13:58 (IST)
Sep 27, 2018 13:51 (IST) 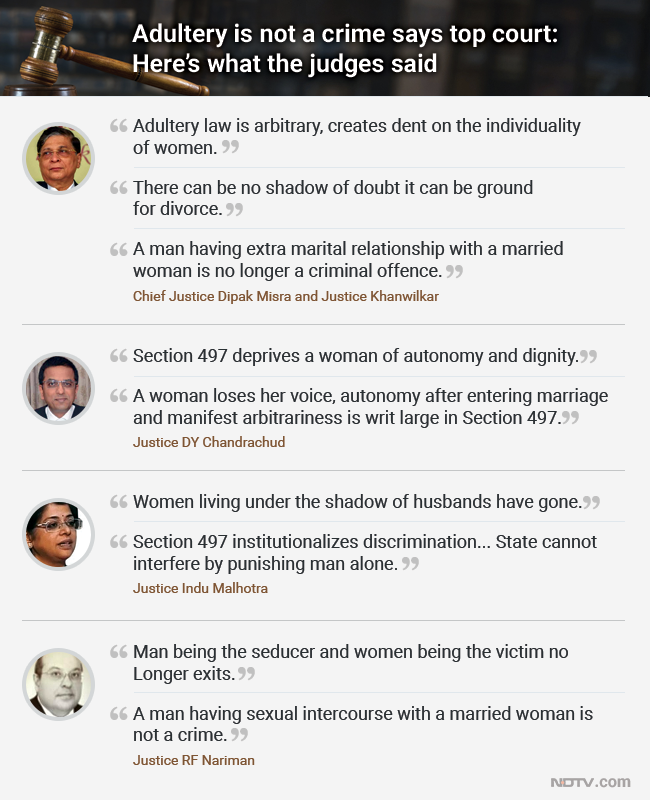 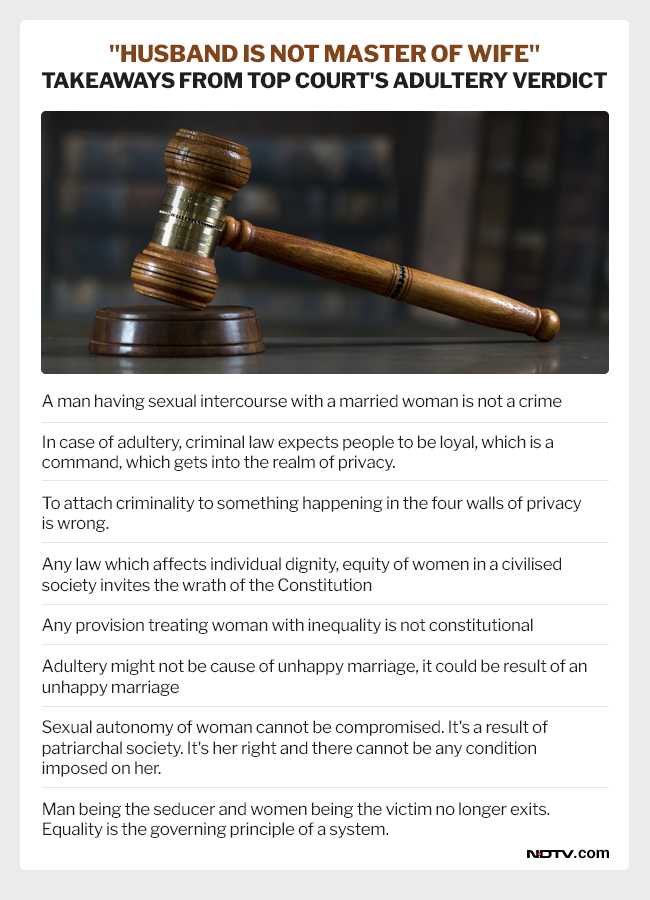 Adultery Law: "Husband Is Not Master Of Wife" - Key Points In Top Court's Adultery Ruling
Adultery is not a crime anymore in India, but it can be grounds for divorce, the Supreme Court said today. In past hearings, the Supreme Court had asked the centre how the 158-year-old law preserved the sanctity of marriage when the extramarital affair becomes non-punishable if the woman's husband stands by her.
Sep 27, 2018 12:03 (IST) 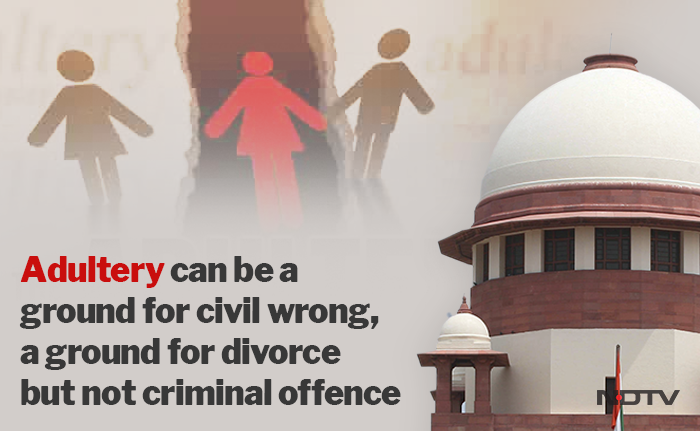 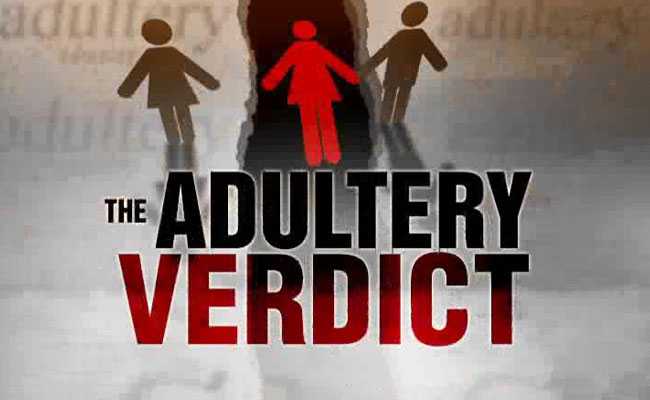 Adultery not a crime, law is unconstitutional, rules Supreme Court

#AdulteryLaw | "There can be no shadow of doubt adultery can be ground for divorce": CJI Dipak Misra reading out the verdict for himself and Justice AM Khanwilkar on the petition challenging the validity of #Adultery law.

#AdulteryLaw | Chief Justice of India Dipak Misra on behalf of Justice AM Khanwilkar and himself, says, "any system treating women with indignity or discrimination invites wrath of the Constitution".

Sep 27, 2018 10:41 (IST)
What the five-bench judges say:
Sep 27, 2018 10:40 (IST)
Adultery is a criminal offence in 17 countries including 20 States in United States of America including New York, Massachussets etc.
Adultery is a crime "against marriage and society" and thus the "act of adultery is a criminal offence as it affects the matrimonial right of a spouse. The act of adultery causes mental injury," the centre said.
Sep 27, 2018 10:36 (IST)
Earlier, the Supreme Court upheld the law against adultery thrice. Last year, the top court said the laws on adultery treat a woman as her husband's subordinate and time has come for society to realise that a woman is as equal to a man in every respect.
Sep 27, 2018 10:34 (IST)
The centre's defence:
Pushing for the petition to be dismissed, the centre responded,"Don't decriminalise adultery, it will be detrimental to the intrinsic Indian ethos."
"Scrapping Section 497 of the Indian Penal Code and the Section 198(2) Criminal will prove to be detrimental to the intrinsic Indian ethos, which gives paramount importance to the institution and sanctity of marriage," the Centre said.
"The law was enacted to protect and safeguard the sanctity of marriage, keeping in mind the unique structure and culture of the Indian society. The decriminalisation of adultery will result in weakening the sanctity of a marital bond and will result in laxity in the marital bond," the Centre said in its affidavit.
Sep 27, 2018 10:33 (IST)
What the law says?
Section 497 of the Indian Penal Code says: "Whoever has sexual intercourse with a person who is and whom he knows or has reason to believe to be the wife of another man, without the consent or connivance of that man, such sexual intercourse not amounting to the offence of rape, is guilty of the offence of adultery."
The law says "no person other than the husband of the woman shall be deemed to be aggrieved" by adultery. In his absence, anyone else who "had the care of the woman when such offence was committed" may file a complaint on behalf of the husband.
Sep 27, 2018 10:32 (IST)
The top court had questioned the government how the law preserved the "sanctity" when the extra-marital affair becomes non-punishable if the woman's husband stands by her.
"Dichotomy is manifest (in Section 497)" as "husband can only have control over his emotion and cannot ask wife to do this or that", the constitution bench had told the government.
Adultery law