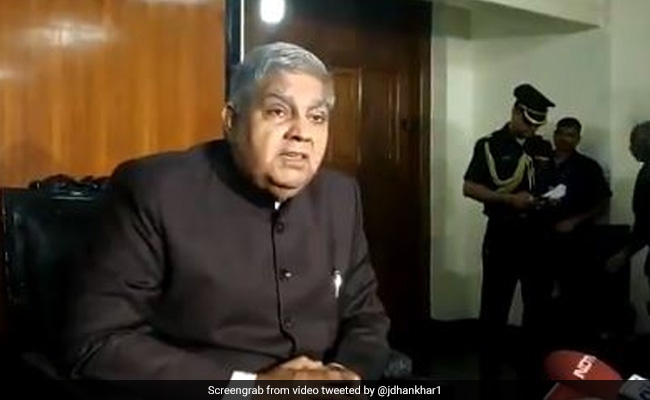 "@MamataOfficial. Now that the Supreme Court is seized of challenge to validity of Citizenship (Amendment) Act 2019 and has granted no stay, I appeal all to give up agitational path in the interest of peace so that normalcy returns and suffering of people is contained," Mr Dhankhar tweeted.

The top court on Wednesday issued notice to the centre and sought its response by the second week of January on a batch of petitions challenging the law. The law provides Indian citizenship rights to non-Muslim migrants of Pakistan, Bangladesh and Afghanistan.

President Ram Nath Kovind had given assent to the Citizenship (Amendment) Bill, 2019 on December 12, turning it into law.

Violent protests against the Citizenship (Amendment) Act erupted in several districts of West Bengal since December 13. Protesters set fire to railway properties and buses in different parts of the state.

Asking people to stay away from violence, West Bengal Chief Minister Mamata Banerjee led three rallies in Kolkata and Howrah since December 16 against the law.

The BJP had also taken out rallies in support of the law.