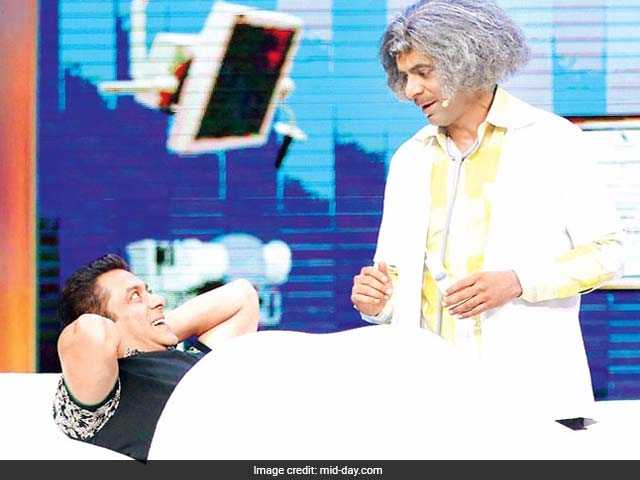 Salman Khan and Sunil Grover in a still from the show (Image courtesy: mid-day.com)

Mumbai: For the promotions of his last film, Sultan (2016), Salman Khan had gone on Kapil Sharma's comedy show, reportedly after much haan-haan, naa-naa owing to his contract with Colors' Bigg Boss. And Kapil's fallout with the channel was fresh in public memory. Now, the television promotions of Sallu-starrer Tubelight sans Kapil have set tongues wagging.

Over the weekend, the Bollywood superstar shot for a two-hour special for Sony, which currently telecasts The Kapil Sharma Show. The episode, slated to be aired on June 18 in the run-up to Eid, features Sunil Grover (Dr Mashoor Gulati and Rinku Bhabhi), Ali Asgar (Naani) and Sugandha Mishra (Teacher). Interestingly, all three had quit The Kapil Sharma Show after the headline act assaulted Sunil on a flight. What's more, Sunil appeared in his Dr Mashoor Gulati avatar.

Apart from the trio, internet sensation Dr Sanket Bhosale, who is known to mimic Salman Khan, was also part of the 120-minute shenanigans. "It was a special episode for Tubelight and we had a lot of fun shooting for it. Although I can't reveal much, I can say that Salman bhai was really amazed and surprised by our gags. He was rolling with laughter and he complimented us by saying that our comedy was not offensive," Sanket said.

Promoted
Listen to the latest songs, only on JioSaavn.com
Insiders inform that with TRPs of Kapil Sharma's show taking a beating post the mid-air fracas, the channel wanted to check Sunil's popularity and competence as an individual artiste. "The special episode is an experiment to see if Sunil can hold the audience's interest on his own without Kapil's help. They want to be sure of the fact that the dipping TRPs are indeed due to Sunil Grover's absence. Once that's confirmed, they hope to sign him as the main act of a new show. Ali, too, will be roped in," adds the source.