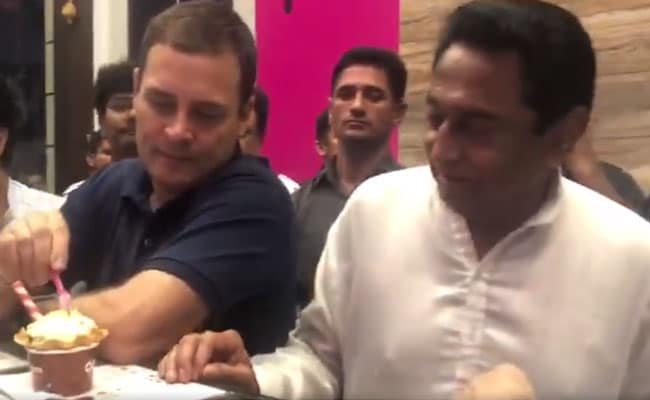 In poll-bound Madhya Pradesh, every movement of political leaders is being closely watched and every word carefully analysed. So when Rahul Gandhi took a break at an ice cream parlour in Indore and remarked, "Kamal, ice cream achhi hai", Chief Minister Shivraj Singh Chouhan -- already miffed over the Congress chief's allegation that his son was named in the Panama Papers -- questioned if that was how he addressed his elders.

As he was about to dig in, he saw a little boy and offered him a bite. "Hello! Ice cream logey? (want an ice cream?)," he said and the child lapped it up.

However, when Mr Gandhi said, "Kamal, ice cream bohat achi hai tum bhi khao (Kamal, ice cream is really nice, you should have it too)", the chief minister didn't like it when the Congress leader addressed Kamal Nath by his first name.

"Kamal Nath has worked with his father (Rajiv Gandhi). Is this Indian culture to address a man of 70-75 years by his name?" said Shivraj Chouhan was quoted as saying by news agency ANI.

Panama Papers refers to the leak of millions of files from the database of the world's fourth biggest offshore law firm Mossack Fonseca.

Mr Gandhi later clarified that he was referring to Chhattisgarh Chief Minister Raman Singh's son and not Kartikeya. But even while clarifying, the Congress president didn't spare the opportunity of taking another dig. He quipped he got "confused" due to the "high number of scams" under the BJP government.

The BJP, aiming to win a fourth term in Madhya Pradesh, used Mr Gandhi's faux pas to ramp up its attack on the Congress. The chief minister accused Rahul Gandhi of making "patently false allegations of Vyapam to Panama Papers against his family" and threatened with defamation suit for "frivolous and malafide statements".

"After Rahul Gandhi made allegations against me and my son, media asked him for proof. However, he said that he got confused. If you will keep getting confused like this, then how will you run the country?" Mr Chouhan said.

The Congress, which has been out of power in the state since 2003, is leaving no stone unturned to target Shivraj Singh Chouhan. The state goes to polls on November 28 and votes will be counted on December 11.