The three-party alliance, the "Maharashtra Vikas Aghadi", parties paraded MLAs before the media after staking claim to power on Monday morning. 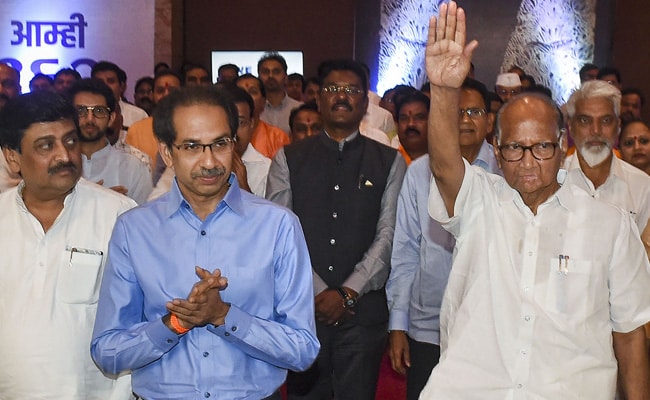 At the Shiv Sena-Nationalist Congress Party (NCP)-Congress show of strength at a Mumbai five-star hotel on Monday evening, there were 158 MLAs – not 162 – as the three parties declared in posters, tweets and hashtags. But the four absentees are accounted for, tweeted Shiv Sena's Priyanka Chaturvedi after the event that also starred Sena chief Uddhav Thackeray and NCP president Sharad Pawar.

The four who were missing were NCP MLAs Narendra Zhirwal, who arrived in Mumbai later, Dharmarao Atram, who was in hospital, Congress's Prithviraj Chavan, who is in Delhi and Sunil Kedar, in Nagpur for local polls, Ms Chaturvedi tweeted with the hashtag #WeAre162.

The three-party alliance, the "Maharashtra Vikas Aghadi", paraded MLAs before the media after staking claim to power on Monday morning.

The alliance has challenged in the Supreme Court the government of BJP's Devendra Fadnavis, formed after a sudden oath ceremony on Saturday morning in which the NCP's Ajit Pawar was sworn in as Deputy Chief Minister. The BJP told the court that the governor invited Mr Fadnavis on the basis of a letter of support from Ajit Pawar with signatures of all 54 NCP MLAs. Ajit Pawar's uncle Sharad Pawar has alleged that signatures taken for a different alliance were misused by the BJP and Ajit Pawar.

The BJP says it has the support of 170 MLAs, including the NCP.

The NCP has since claimed that all but Ajit Pawar are with the party; a few MLAs who went "missing" after attending the secretive oath ceremony also returned yesterday. These include Narendra Zhirwal and Dharmarao Atram.

Some of the MLAs have claimed that they were tricked into attending the oath ceremony without knowing what was going on, and that they remain with Sharad Pawar.