After the House met at 11 am, Samajwadi Party (SP) member Manoj Pandey raised the issue and alleged that "democracy was put to shame" during Monday's bypoll. 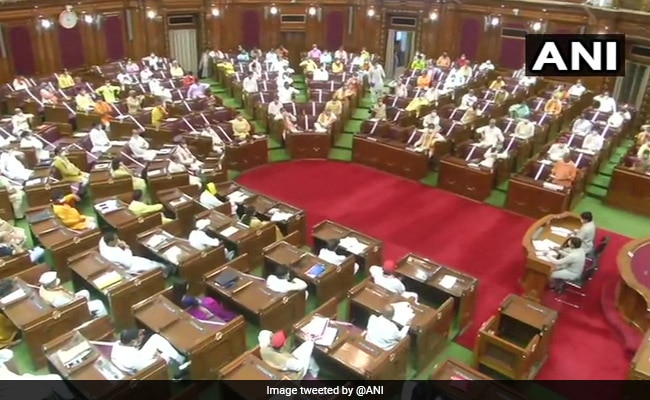 Samajwadi Party legislators on Tuesday disrupted proceedings at the Uttar Pradesh Assembly, alleging the "murder of democracy" at the bypolls in Rampur Sadar.

After the House met at 11 am, Samajwadi Party (SP) member Manoj Pandey raised the issue and alleged that "democracy was put to shame" during Monday's bypoll.

Mr Pandey and other SP legislators alleged that people in Rampur Sadar were not allowed to vote and were beaten with sticks so that they would not come out. They also staged a protest in the well of the House.

When Speaker Satish Mahana's repeated requests to the SP members to return to their seats fell on deaf ears, he adjourned the House for 15 minutes and later extended it for another 15 minutes.

SP chief Akhilesh Yadav and his uncle Shivpal Singh Yadav were not present in the House at the time.

Polling was sluggish in Rampur Sadar with the segment, earlier held by SP leader Azam Khan, registering around 33.94 per cent turnout by 6 pm.

About the low turnout in Rampur Sadar, which has a sizeable Muslim population, Azam Khan's family members alleged that police threatened, harassed and stopped people from voting.

The state government denied the charges.

Justifying the action, Parliamentary Affairs Minister Suresh Kumar Khanna said whatever was done was as per law.

"Their (SP members) work is only to shout. There is rule of law in the state.

"All allegations of the SP are baseless. Whenever the SP sees defeat, it makes such allegations," Mr Khanna said.