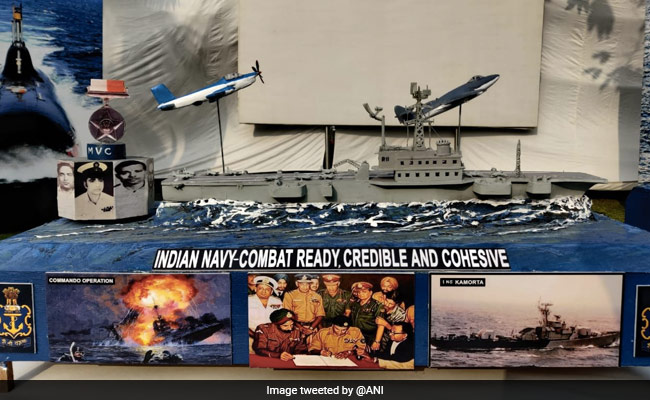 The Indian Navy's tableau at the Republic Day parade this year will showcase models of INS Vikrant and naval operations that were conducted during the 1971 India-Pakistan war, said its spokesperson Commander Vivek Madhwal on Friday.

"This year's tableau being paraded is in pursuance of tri-services theme "Swarnim Vijay Varsh" and showcases Indian Navy's stellar role during the 1971 Indo-Pak war," he said at a press conference here.

The forward part of the tableau depicts the attack on Karachi harbour by the missile boats undertaken as part of Operation Trident and Python, Madhwal mentioned.

"The rear section shows the aircraft carrier INS Vikrant conducting flying operations. These operations led to a sizable damage to ships and shore installations of east Pakistan and contributed immensely to the victory at sea," he said.

India is currently celebrating the golden jubilee year (Swarnim Vijay Varsh) of the victory in the 1971 war that led to the creation of Bangladesh.

On the sides of the tableau trailer would be murals depicting various ships that participated in the war, commando operations undertaken by the Navy along with Mukti Bahini and the surrender ceremony at Dhaka, Madhwal stated.

In a video message, Vice Admiral SN Ghormade, Controller of Personnel Services, said that while the Indian Navy has many other operations to its credit during the 1971 war, the paucity of space on the tableau precludes showcasing all those elements.

"The tableau is an attempt to highlight the most significant aspects of Naval operations conducted during 1971 war and pay rich tributes to those who were involved in these," he said.