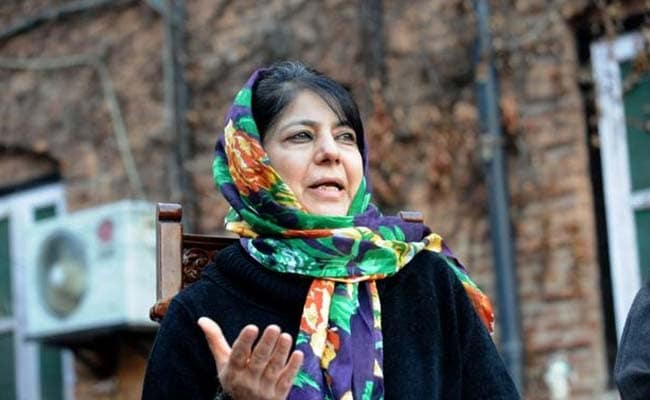 Mehbooba Mufti urged the international community to recognise the potential of Jammu and Kashmir's youth by utilising their knowledge.

Srinagar: Jammu and Kashmir Chief Minister Mehbooba Mufti on Monday urged the international community to recognise the potential of her state's youth by utilising their knowledge and expertise in key areas.

"I expect major youth-oriented interventions from the international community to give wings to the ambition of our talented youth," Mehbooba Mufti said in an interaction with German Ambassador to India Martin Ney.

The German envoy -- who was accompanied by his wife Med Gabriele Ney -- said he was very keen to engage the youth of Jammu and Kashmir by giving them a new perspective in the field of education, entrepreneurship and skill development.

The chief minister admired the perseverance of young people of her state for shaping their future despite the threat of violence and conflict.

Batting for greater exchange of ideas between the youths of Jammu and Kashmir and other countries, Mehbooba Mufti said: "Our baby steps need a big push from countries like Germany, which have a wealth of expertise in the fields of skill development, biotechnology, animal husbandry and horticulture."

She said transfer of knowledge can take place only when there is a healthy discourse on matters of mutual interest.

"Unfortunately, our success stories are sparingly highlighted and even these get drowned in the din of violence as and when it rears its ugly head," she said.

Mehbooba Mufti also suggested if Germany can introduce a few scholarships and fellowship programmes for young students and entrepreneurs for which a link-up between industry and academia can be mutually worked out.

On conflict resolution and challenges facing world peace today, Mehbooba Mufti said Jammu and Kashmir, being the only Muslim majority state in the country, can become a showcase to which the world can look up to.

She, however, said that unless there was greater people-to-people contact, it will be difficult for anyone to change people's opinion.

"Seeing is believing. We practise the great religion of Islam in its true sense by living together as a tolerant society with deep sense of respect for sensitivities of each community living here," she said.

Urging a rethink on travel advisories imposed by many European countries, Mehbooba Mufti said Kashmir was unjustly compared with conflict zones in other parts of the world, where the sheer magnitude of violence was forcing people to leave their homes.

She sought help from Germany "in changing this negative perception which is taking a heavy toll on our tourism sector, the mainstay of our economy".

The envoy, who described Kashmir as "one of the most beautiful places on earth", was on a visit to the state as part of Germany's Management Training Programme in collaboration with Confederation of Indian Industry (CII).