15th Rajasthan Assembly Session: While some took their oath of office in Hindi, English and Sanskrit, several lawmakers demanded permission of protem Speaker Gulabchand Kataria to allow them to take their oath in the Rajasthani language. 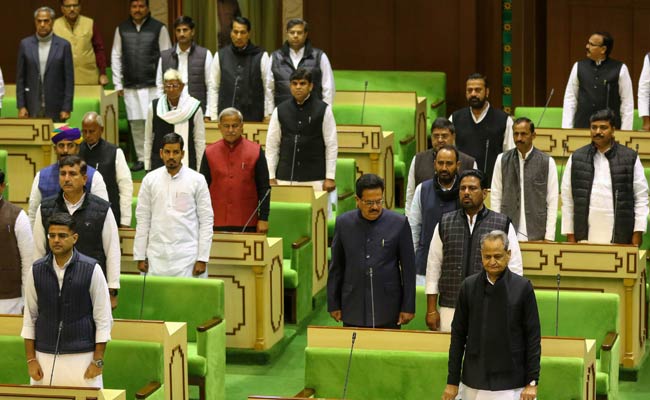 The first session of the 15th Rajasthan Assembly began on Tuesday amid clamour for oath-taking in the Rajasthani language after the newly elected members arrived barefoot or on tractors.

While some took their oath of office in Hindi, English and Sanskrit, several lawmakers demanded permission of protem Speaker Gulabchand Kataria to allow them to take their oath in the Rajasthani language.

Biharilal Bishnoi, a lawmaker from Rajasthan's Nokha, came with a white band stuck on his mouth with a message saying that the Rajasthani language should be declared a valid language for the swearing-in ceremony.

Around a dozen lawmakers joined Mr Bishnoi in his demand. However, the protem Speaker denied this.

These lawmakers then pasted white bandages on their mouth as a mark of protest.

Indira Devi, the Rashtriya Loktantrik Party lawmaker from Nagaur's Medata seat, failed to read the oath and was asked by Kataria to repeat the pledges after him.

Several interesting scenes were witnessed even outside the Rajasthan Assembly, as Baljeet Yadav, an Independent lawmaker from Behrod, came driving a tractor, while Om Prakash Hudla from Mahuwa came barefoot.

Speaking to the media, the Behrod lawmaker said: "I belong to a farmer family. This tractor has been lucky for me as well as my family and hence I decided to come on my lucky mascot."

Mr Hudla, who resigned from the BJP in 2017 and contested as an Independent, said: "I had pledged to enter the assembly barefoot soon after BJP denied me a ticket."

He said he would remain barefoot till March 10 when he would organise a mass wedding ceremony in his constituency and only then would he wear his slippers.

Sadulpur lawmaker and discus thrower, Krishna Poonia, who won a gold in the 2010 Delhi Commonwealth Games, was dressed in the attire of an athlete, and wearing her medal.

Many of the lawmakers were seen bowing their heads on the stairs of the Rajasthan assembly before entering.