Taking to Twitter, Rahul Gandhi cited a media report that claimed the agriculture ministry has admitted that demonetisation has hit the farmers hard. 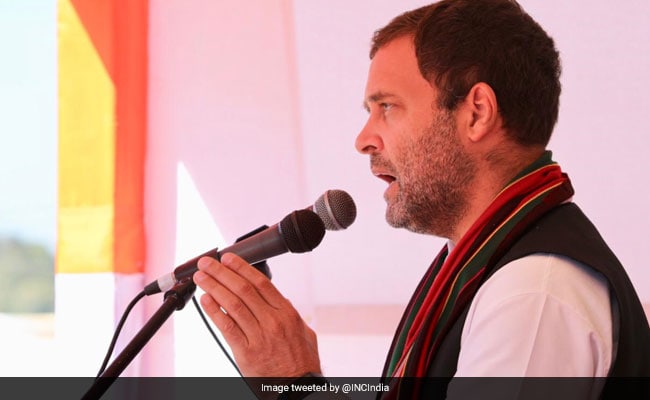 Congress president Rahul Gandhi on Wednesday claimed that demonetisation had "destroyed" the lives of farmers and accused Prime Minister Narendra Modi of making "fun" of their plight during his poll campaigns.

Taking to Twitter, he cited a media report that claimed the agriculture ministry has admitted that demonetisation has hit the farmers hard.

"Noteban has destroyed the lives of farmers. Now they do not even have enough money to buy seeds and fertilizer," Mr Gandhi tweeted in Hindi.

"But, Modi ji is making fun of our farmers' plight. Now his Agriculture Ministry has also said that farmers were badly affected due to demonetisation decision," he said on Twitter referring to Modi's campaigns in Chhattisgarh and Madhya Pradesh.

The Agriculture Ministry, however, refuted the reports later.

While polling in Chhattisgarh was completed in two phases on November 12 and 20, elections in Madhya Pradesh will be held on November 28.

On Saturday, the Congress chief tagged on Twitter a video of the prime minister's speech during the poll campaign in Chhattisgarh, where he alleged that people were hiding their black money under beds and in wheat stocks in their homes before the note ban.

Mr Gandhi had asked if absconders like Vijay Mallya, Nirav Modi and Mehul Choksi, who have allegedly committed bank frauds, have ever sown wheat.

"Have you seen Mallya, Mehul bhai and Nirav Modi sow wheat. Modiji, don't insult the farmers. You first indulged in a scam by collecting farmers money by noteban and handed it over to your suit-boot friends.

"Now you are saying that farmers' money was black money. India will not tolerate this insult of farmers," Mr Gandhi had tweeted in Hindi on Saturday.

Union Finance Minister Arun Jaitley has defended demonetisation, saying it was a "highly ethical" move and not merely a political one.

Jaitley also said hard data showed an increase in tax base, greater formalisation of the economy and India retaining the fastest growing economy tag for the fifth year in a row.

The Congress is seeking to woo the farmers in Madhya Pradesh, which goes to polls on November 28, and has announced a farm loan waiver for them in the state, if it comes to power.