Speaking to ANI, Manoj Kumar appealed to people to join the farmers' agitation as it has become a "public interest movement." 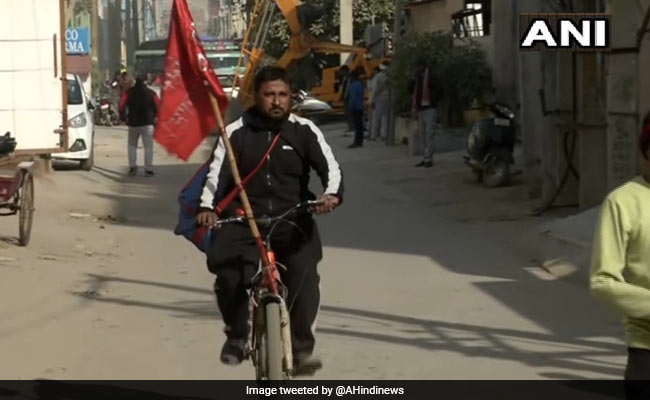 Manoj Kumar appealed to people to join the farmers' agitation.

Manoj Kumar, who is employed as a teacher in a government school in Punjab's Sangrur district, cycled 225 kilometres to reach Delhi's Tikri border on Monday to express solidarity with the farmers who have been protesting the agricultural laws for over a month.

Speaking to ANI, Mr Kumar appealed to people to join the farmers' agitation as it has become a "public interest movement."

Urging people to come forward to participate in the agitation, he said, "I appeal to all people that we have to be united and support this movement to make the farmers win. This agitation has become a public interest movement and if farmers lose then the country will be defeated."

Earlier, Satyadev Manjhi, a 60-year-old man from Bihar's Siwan reached Tikri after completing a journey of nearly 1,000 kilometres in 11 days on a bicycle to participate in the farmers' protest. Manjhi had urged the Central government to repeal the three farm laws.

Meanwhile, to resolve the impasse, the central government has called farmers for a meeting on December 30 at 2 pm at Vigyan Bhawan in Delhi.

Farmers have continued their protest at the borders of Delhi against the Farmers' Produce Trade and Commerce (Promotion and Facilitation) Act, 2020; the Farmers (Empowerment and Protection) Agreement on Price Assurance and Farm Services Act, 2020; and the Essential Commodities (Amendment) Act, 2020.