"He Was 25, My Son 20": Priyanka Gandhi Meets Family Of Farmer Who Died

Navreet Singh had died after his tractor overturned on January 26, the police had said, when sections of a massive tractor parade during protests against the centre's new agricultural laws strayed off agreed routes, clashing with cops. 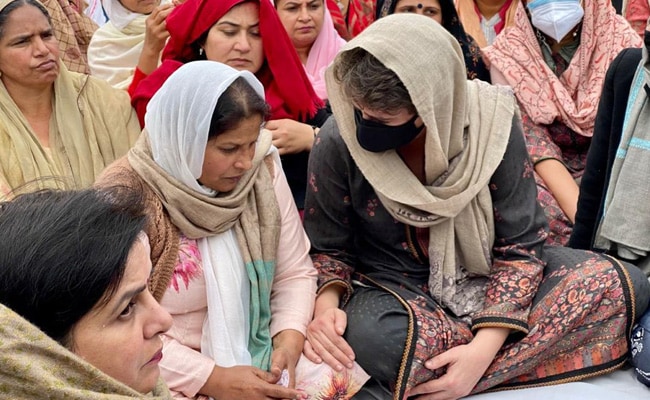 Congress general secretary Priyanka Gandhi Vadra on Thursday met family members of Navreet Singh, a farmer who lost his life during the protest in New Delhi on Republic Day, and also attended a prayer ceremony for him in Uttar Pradesh's Rampur.

"Navreet was 25, my son is 20. I want to tell this family you are not alone. The country and all of us are all standing with you," she said.

A Samajwadi Party delegation and Rashtriya Lok Dal leader Jayant Chaudhary also visited the village at the same time as the Congress leaders.

Navreet had died after his tractor overturned on January 26, the Delhi police had said, when sections of a massive tractor parade during protests against the centre's new agricultural laws strayed off agreed routes, clashing with cops. The family, however, has claimed he had been shot first. The Uttar Pradesh government has denied this, saying his post-mortem report says the death was from injuries from the tractor accident and no bullet was found.

Uttar Pradesh minister Mohsin Raza called the visit a "drama". "The drama Priyanka Gandhi Vadra and Rahul Gandhi are doing, nothing is going to come out of it. You are offering fake sympathy at a time Modi's ji policies are helping farmers," he said.

Earlier on her way to Rampur, three to four vehicles in Priyanka Gandhi Vadra's convoy ran into each other on a highway in western Uttar Pradesh's Hapur district. No one was hurt in the incident but some vehicles were damaged.

The vehicles at the end of the convoy hit each other, media in-charge of the Congress, Lalan Kumar said in Lucknow.

Earlier in the day, Mr Lallu retweeted a post which had a video of him along with Priyanka Gandhi Vadra seated in a car on the way to Rampur.

Another video on social media showed her cleaning her SUV which had drawn dirt on its windshield amid slight rains in the region in the morning as the entourage stopped along the road somewhere before reaching Rampur.

Congress, among other opposition parties including BJP's former allies Shiromani Akali Dal and Shiv Sena, has lent its support to the farmers' agitation.

Thousands of farmers are camping at Delhi borders since November demanding that the centre take back the three laws enacted last September and guarantee minimum support price for crops. The centre has maintained that the laws will help them earn more.