Holding placards that gave out messages on women's safety, the BJP's new women leaders were seen on the roads of Lucknow on Sunday. 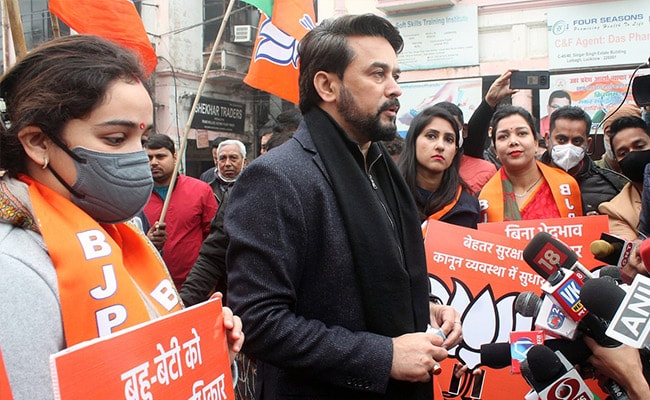 With the BJP taking to the streets with a team of women leaders, at least three of whom joined the saffron party in recent times, the Congress on Monday termed it “Priyanka effect” and a “face-saving exercise” for the government.

Union Minister for Information and Broadcasting Anurag Thakur, along with a team of women leaders, including the latest entrants - Aparna Yadav, Aditi Singh and Priyanka Maurya - was on the campaign trail in the heart of the state capital on Sunday.

"The 'Ladki Hoon Lad Sakti Hoon' slogan given by Priyanka Gandhi Vadra and the manner in which she has been fighting for their cause has forced other political parties to realize that politics cannot be done without women. What we saw on the roads of Lucknow yesterday (Sunday) can clearly be termed Priyanka effect," Uttar Pradesh Congress Committee chief Ajay Kumar Lallu told PTI in an interview.

"After announcing 40 per cent tickets to women, Priyanka had stated that no party can ignore half the population. This is coming true and we find that the BJP leaders are marching on the streets projecting a women-friendly face," Mr Lallu said.

"Even then, they had to resort to women leaders who crossed over to the BJP only in the last few days," Mr Lallu said.

Holding placards that gave out messages on women's safety, the BJP's new women leaders were seen on the roads of Lucknow on Sunday.

Most conspicuous in the team was the presence of Aparna Yadav, the younger daughter-in-law of Samajwadi Party patriarch Mulayam Singh Yadav and Congress' rebel lawmaker from Rae Bareli Aditi Singh, who had formally joined the BJP last week.

Priyanka Maurya, who until a few days ago, featured on the posters of the Congress' 'Ladki Hoon Lad Sakti Hoon' (I am a woman and I can fight) campaign and had shifted her loyalties, also figured in the Sunday rally.

Mr Lallu said that had the BJP done some concrete work to uplift women in the state, it would not have been projecting women who earned a name for themselves while being in other parties.

On being asked whether Supriya Aron, former Bareilly mayor and Priyanka Maurya, the party's erstwhile poster girl, parting ways Congress will impact the Congress, Lallu said it will not affect Priyanka Gandhi Vadra's campaign in any way.

"We have promised 40 per cent tickets to women and are doing it. We are keeping our commitment and implementing it fully," Mr Lallu said.

He said those who are ready to “struggle” will remain with the party.

On Priyanka Maurya's rift with the Congress, Mr Lallu said there will always be 10 claimants for a ticket and it can be given to only one.