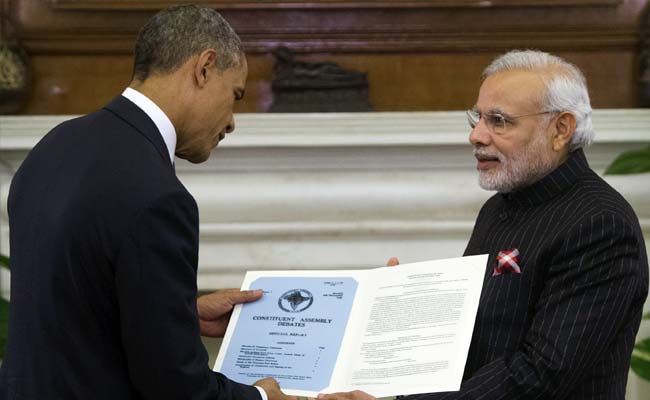 PM Narendra Modi presents Barack Obama with a gift of a copy of a 1950 telegram from then-US Secretary of State to India on January 25 in New Delhi. (Agence France-Presse)

New Delhi: Prime Minister Narendra Modi today gifted a piece of Indo-US history to President Barack Obama in the form of a copy of the first telegram from the United States to India's Constituent Assembly in 1946.

The telegram was sent by then Acting Secretary of State Dean Acheson to Sachchidananda Sinha, the provisional Chairman of the Constituent Assembly.

PM Modi presented the copy after he received President Obama at the Hyderabad House and before proceeding to the high level delegation level talks on various issues.

The copy was the reproduction of the telegram which was read out at the inaugural sitting of the Constituent Assembly of India on December 9, 1946.

In the telegram, Acheson says: "With the approach of December 9, I extend to you as provisional chairman of the Constituent Assembly and through you to the Indian people the sincere good wishes of the United States Government and of the people of United States for a successful conclusion of the great task you are about to undertake.

Promoted
Listen to the latest songs, only on JioSaavn.com
"India has a great contribution to make to the peace, stability and cultural advancement of mankind and your deliberations will be watched with deep interest and hope by freedom loving people throughout the entire world."

The Prime Minister gifted the historic item to President Obama on the eve of India's Republic Day.