Read inOther Languages
This Article is From Jul 07, 2018

PM Narendra Modi was addressing a large rally in Rajasthan said to be the precursor to the launch of BJP's campaign for state elections this year.

Prime Minister Narendra Modi today tore into the Congress, calling the party a "bail-gaadi" and said several of its senior leaders were out on bail. The dig, a play on the Hindi word for a bullock cart, appeared to be aimed at Congress leaders like Shashi Tharoor who received protection from arrest in the case about his wife Sunanda Pushkar's death.

"Several leaders who are called stalwarts of the Congress and former ministers are out on bail these days," PM Modi said at a public rally in Jaipur where he pitched for the BJP's re-election in Rajasthan state polls due by the end of the year. He presented the Congress in stark contrast to the BJP, saying "We have no tolerance towards corruption. All our efforts are aimed at building a new India."

Besides Mr Tharoor, who's anticipatory bail was converted to a regular bail by a court in Delhi today in the Sunanda Pushkar case, Congress chief Rahul Gandhi and his mother Sonia Gandhi too are out on bail in the National Herald case of cheating and misappropriation. 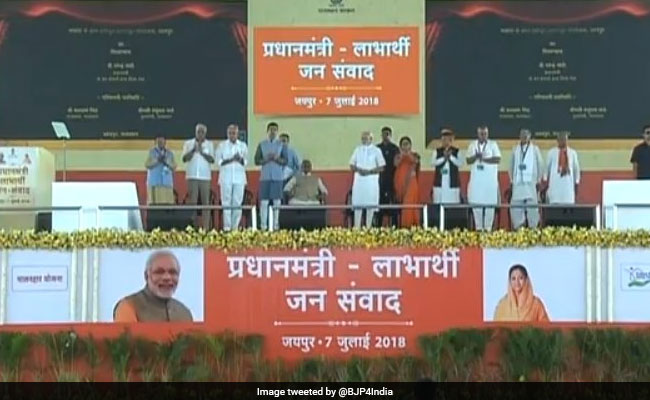 The Congress responded sharply. "The PM who has brought farmers back to bailgaadi in age of tractor speaks of corruption. Complaints against BJP ministers are not even inquired. When we come to power, it will be inquired (into), and they will not be on bail but in jail," Congress leader RPN Singh said.

PM Modi also said people were well aware of the "intentions" of the Congress party and criticised it for "questioning the capabilities of the army" - an apparent reference to the surgical strike on terrorist launch pads in Pakistan-occupied Kashmir (PoK) in 2016.

"It is unfortunate that political opponents also committed a sin by raising questions on the capabilities of the army. This has never happened before and the people will not forgive those who are doing this kind of politics," he said.

Saying that BJP had the singular agenda of development, he said, "Never forget what the previous government left in Rajasthan." The Prime Minister inaugurated several infrastructure projects worth over Rs 2,100 crore in the state today.

PM Modi's visit is said to be a precursor to the official launch of the BJP's campaign for the Rajasthan assembly elections and came just a week after the party ended an internal tussle and picked a new state unit chief.