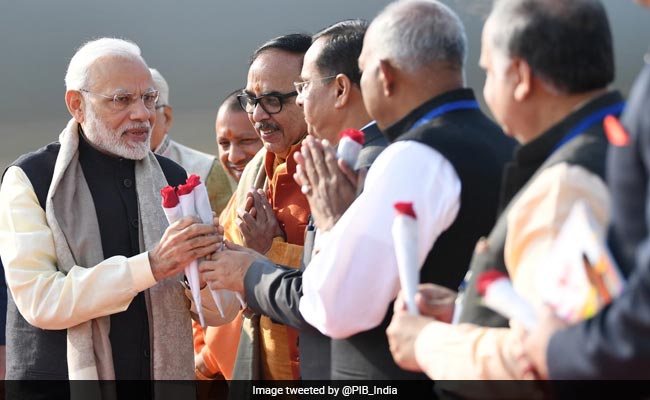 PM Narendra Modi is greeted by leaders at Raebareli today

Prime Minister Narendra Modi reached Raebareli today in his first trip to the traditional seat of the Gandhi family. He will also visit Prayagraj, formerly known as Allahabad, to review preparations for the Kumbh Mela to be held in the city next year.

According to district officials, the Prime Minister will inaugurate projects worth Rs 1,100 crore during the visit.

On Thursday, Uttar Pradesh Chief Minister Yogi Adityanath had visited Raebareli to oversee preparations for the visit. He also took a tour of the Rail Coach Factory in the district.

The Prime Minister's visit is being seen as a strategy of the BJP to pin the Congress leadership in their respective constituencies in the 2019 general election. Raebareli is represented in the Lok Sabha by former Congress chief and UPA (United Progressive Alliance) chairperson Sonia Gandhi.

PM Modi's visit was planned before the counting of votes polled in the five states was taken up on December 11, following which the Congress party threw out BJP governments in three states - Rajasthan, Madhya Pradesh and Chhattisgarh.

Sonia Gandhi has not visited Raebareli since April. Before that, she visited the constituency in mid-2016. Also, she did not campaign in the constituency during the 2017 Uttar Pradesh election, after she developed a health issue during a roadshow in Varanasi.

The Congress has accused PM Modi's government of derailing the development of Raebareli.

PM Modi is likely to visit Uttar Pradesh again on December 29 to issue a commemorative postal stamp on backward caste Maharaja Suheldev Rajbhar and lay the foundation stone of infrastructure projects in Ghazipur.