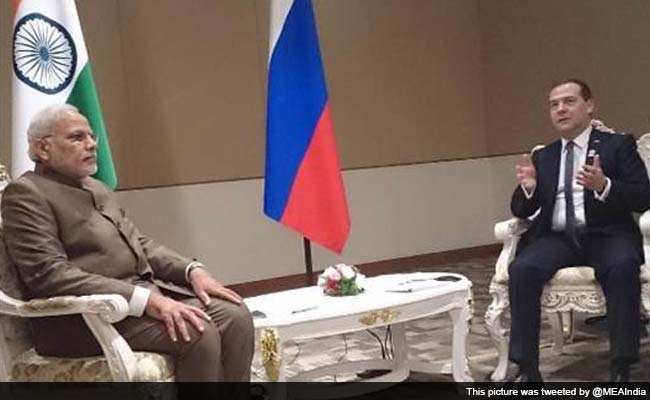 The meeting with the Russian leader was the first diplomatic engagement of PM Modi on the third day of his 10-day three-nation tour of Myanmar, Australia and Fiji on the sidelines of the two back-to-back India-ASEAN and East Asia summits in Nay Pyi Taw, Myanmar.

"India is a close and valued partner for us," Mr Medvedev told PM Modi while discussing the extent of Indo-Russian relations during their meeting at the Myanmar International Conference Centre.

In response PM Modi said that he was confident that the ties between the two countries will be strengthened. PM Modi also recalled his visit to Russia in 2001. During their conversation, Modi also spoke on the need for the federal units - states and regions of the two countries to cooperate more, a view which Medvedev endorsed.

Russian President Vladimir Putin is travelling to New Delhi next month for the 15th annual India-Russia summit. PM Modi during his first meeting with Putin on the sidelines of the BRICS summit in Brazil in July favoured broadening India's strategic partnership with Russia in nuclear, defence and energy sectors.

Promoted
Listen to the latest songs, only on JioSaavn.com
He had also invited Vladimir Putin to visit Kudankulam atomic power project during his trip for the annual summit. PM Modi had also fondly recalled his visit to Russia's Astrakhan region in his early days as chief minister of Gujarat which has ties with that region.

Vladimir Putin had said that Russia places its relations with India high enough in the strategic framework.