The drug seizure was made after Sunday midnight in a joint operation by the Indian Coast Guard and the Gujarat Anti-Terrorist Squad (ATS), around 35 nautical miles off the Jakhau coast in Kutch district of Gujarat, they said. 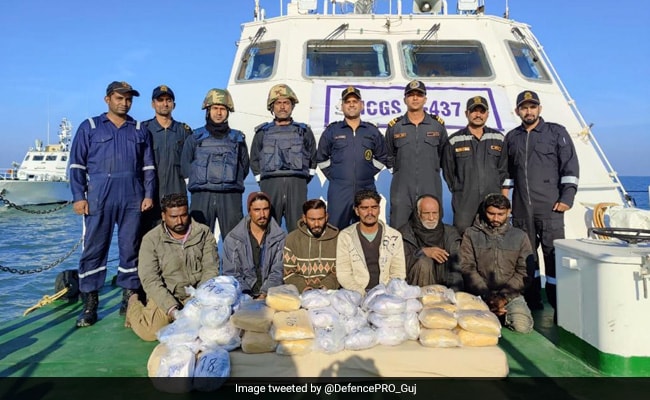 The boat was later brought to the Jakhau coast for further investigation.

A Pakistani fishing boat with six crew members and carrying 77 kg of heroin worth around Rs 400 crore was caught in the Indian waters off the Gujarat coast, officials said on Monday.

The drug seizure was made after Sunday midnight in a joint operation by the Indian Coast Guard and the Gujarat Anti-Terrorist Squad (ATS), around 35 nautical miles off the Jakhau coast in Kutch district of Gujarat, they said.

"They caught the Pakistani fishing boat 'Al Huseini' with six crew members on board in the Indian waters and seized "77 kg of heroin worth approximately Rs 400 crore," Gujarat's defence PRO said in a tweet in the morning.

The boat was later brought to the Jakhau coast for further investigation, he said.

The Gujarat ATS in a release said the Pakistani boat had left the Karachi port and was trying to establish contact using very high frequency (VHF) radio channel and code words, 'Hari-1' and 'Hari-2', for the delivery of the drugs.

The joint operation was carried out after the ATS received a tip-off that the boat from Karachi was to reach around 35 nautical miles off the Jakhau coast, after crossing the International Maritime Border Line between the two countries, it said.

The boat, belonging to one Shahbaz Ali, left the Karachi port and its crew members loaded the drugs sent to them on a fibre boat at a distance of six nautical miles from the Karachi port.

Preliminary interrogation of the captured Pakistani nationals revealed the heroin was supplied by two Pakistani smugglers, identified as Haji Hasan and Haji Hasam, and according to the tip-off, it was to be delivered to people associated with the underworld in Punjab, the ATS said.

It was to be offloaded somewhere along the Gujarat coast in Kutch, it said.

When challenged, the boat's crew members tried to flee. But, the boat was outmaneuvered and the crew members were forced to surrender by the ICG and ATS team, a defence release said.

Despite adverse weather conditions, the boat was thoroughly rummaged and five bags containing approximately 77 kg of heroin were seized.

"The market value of the seized narcotics is estimated to be approximately Rs 400 crore," it said.

The ATS said it has conducted various operations and seized around 920 kg of drugs between August 2018 and December 2021, estimated to to be priced at around Rs 4,600 crore in the international markets.

The ATS has arrested some Pakistani, Iranian and Afghan nationals as well as Indians helping them smuggle the drugs using the Gujarat coast, it said.

According to the Coast Guard, the latest drug haul is its second joint operation with the Gujarat ATS within three months.

In September this year, they had seized 30 kg of heroin worth Rs 150 crore transported by an Iranian fishing boat at the Arabian Sea of the Gujarat coast.

Prior to it, in April this year, the Coast Guard and the ATS had carried out a similar operation and apprehended a boat with eight Pakistani nationals and carrying 30 kg of heroin worth about Rs 150 crore, from the Indian waters near the Jakhau coast in Kutch, officials earlier said.

Last month, the ATS had seized a heroin drug consignment worth about Rs 600 crore from an under-construction house in Gujarat's Morbi district.

The ATS had said the consignment was sent by Pakistani drug dealers to their Indian counterparts via the Arabian Sea.

In September this year, in the single largest heroin haul in India, the Directorate of Revenue Intelligence (DRI) had seized around 3,000 kg of the drug, believed to be from Afghanistan and likely worth Rs 21,000 crore in the global market, from two containers at the Mundra port in Kutch, officials earlier said.