Dilbagh Singh said the major success was achieved on Friday evening, following a well-coordinated joint operation by police and 38 Rashtriya Rifles in Rajouri sector of Jammu region, frustrating Pakistan's design to step up violence and disturb the prevailing peace in the Union Territory. 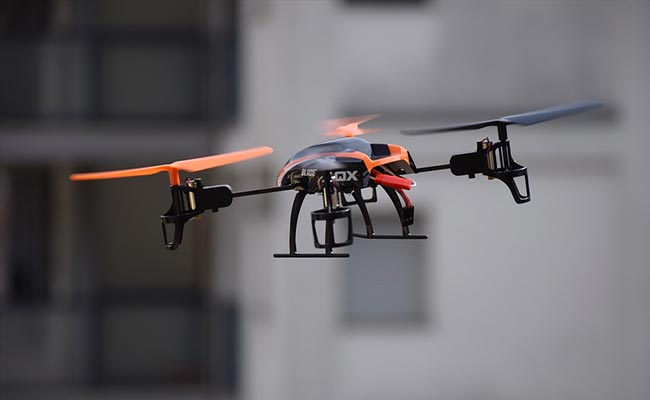 Pakistan dropped weapons and some cash in Indian currency using a drone. (Representational)

Pakistan dropped weapons and some cash in Indian currency using a drone in Jammu and Kashmir's Rajouri district, state police chief Dilbag Singh on Saturday said, announcing the arrest of three LeT terrorists who had picked up the consignment near the Line of Control.

"All the three Lashker-e-Taiba terrorists were residents of Kashmir and had come to pick up the consignment, which was dropped by Pakistan on this side using a drone," Mr Singh, who was joined by senior police official Mukesh Singh, told reporters in Rajouri district.

Mukesh Singh informed this was the third successful operation in the twin districts of Rajouri and Poonch since September 11.

Earlier, a huge consignment of arms and ammunition was recovered from two people in Balakote sector of Poonch, three days later 11 kg of heroin worth Rs 11 crore, meant to fund terrorism activities, was seized in Rajouri district.

"Pakistan and its agencies always remain active and are making every effort to disturb peace and law and order in J-K. It is using drones to drop weapons and narcotics and also push terrorists from both Rajouri and Poonch districts, which had witnessed a spurt in ceasefire violations - almost on a daily basis," the DGP said.

However, he said the police, Army and other forces are working together to scuttle Pakistan's design and to maintain peace and law and order in the Union Territory.

"We are enjoying good operational synergy and the latest arrest of three LeT terrorists and seizure of a huge cache of arms and ammunition was its result. We received information about movement of some suspicious people and accordingly launched the cordon and search operation," he said.

He said three people were seen moving with a bag and were challenged but they hurled a grenade, which luckily did not explode and the trio was overpowered.

The search of the bag led to the recovery of two AK-56 rifles, two pistols, four grenades and Rs 1 lakh in Indian currency, which had smuggled from Pakistan to escalate violence, Dilbag Singh said it came to light that the consignment was dropped on this side of the LoC by Pakistan using the drone and the trio, who hail from Kashmir, had come to pick up the consignment.

"Their interrogation is underway and further details will be shared later," he said.

In response to questions, he said Pakistan is doing its best to revive terrorism in the twin districts of Poonch and Rajouri, which falls in Jammu division and were cleared of militancy over a decade back.

"The people of Rajouri and Poonch are peace loving and they will not allow Pakistan to succeed in its design. There are some elements with whom we will deal sternly," he said.

He termed the dropping of weapons through drones as a "big challenge" and said this is the first such aerial drop in the district though a similar attempt was foiled by the Border Security Force (BSF) along the International Border in Kathua district sometime back.

"This is a hilly terrain and drones just bypass the deployment on the LoC," he said, adding that "we are vigilant to the threat and have taken necessary measures".

On the recovery of a large number of US-made rifles in the recent past, Mr Singh said "we have recovered such types of rifles like M-4 and M-16 in large numbers in the past as well. These rifles are duplicate weapons manufactured in Pakistan and are being smuggled by LeT and Jaish-e-Mohammad terrorists".

"The arrest and recovery was made from Balakote sector of Poonch. The pen drive contains details of assembling and planting the IED," he said.

In another operation on September 14, one person was arrested with 7 kg heroin in Rajouri and later at his disclosure one more arrest was made from Kulgam district of south Kashmir.

Three residents of Poonch were also arrested and their questioning led to the recovery of 4 kg of heroin from the same spot from where the earlier consignment of 7 kg was dumped after smuggling from across the border, he said.