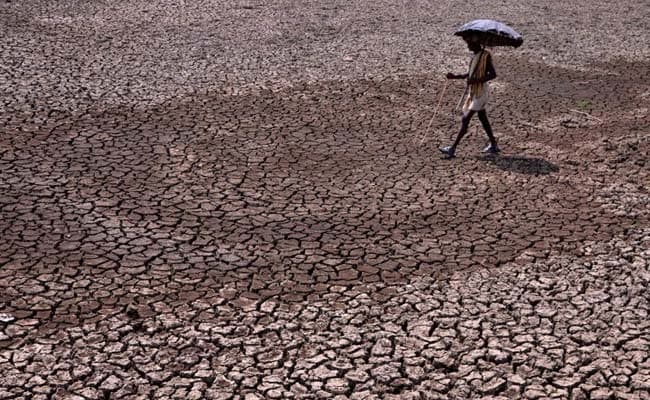 A man holds an umbrella as he walks across a dried-up pond. (Agence France-Presse)

The searing heat wave in Andhra Pradesh and Telangana has killed over 750 people so far, with more deaths being reported as vast swathes of the country reeled under the unrelenting summer heat.

There was no respite in sight with the India Meteorological department warning that severe heat wave conditions are expected to continue in the two worst-hit southern states.

The heat has claimed the most casualties in Andhra Pradesh, where, since May 13, 551 people have died. Most of the deaths have taken place over the last four days, said a senior government official.

Telangana recorded around 200 deaths. Besides, 36 deaths have been reported in Odisha and West Bengal.

Uttar Pradesh continued to reel under sweltering heat with mercury in Allahabad touching 47.7 degrees Celsius -- the hottest in the state.

The steel city of Jamshedpur in Jharkhand experienced the hottest day of the season at 44.8 degree celsius, four degree above normal.

Odisha virtually turned into a boiling cauldron as the searing heatwave conditions further intensified on Sunday with the mercury rising above 45 degree celsius in nine places and above 40 degree celsius in 19 towns.

The toll in the heatwave in Andhra Pradesh since May 18 rose to 333 -- 141 more people succumbed across the state since Saturady, according to a senior official of the AP Disaster Management Department.

The figure was based on information available from different districts until 7.15 pm. Prakasam district recorded the most number of deaths at 57, followed by Visakhapatnam (53) and Vizianagaram (40), an official said.

Telangana reported death of 71 more people since yesterday, as a result of which the toll went up to 199 in 10 districts of the state, a senior official of State Disaster Management Department told PTI.

Promoted
Listen to the latest songs, only on JioSaavn.com
Nalgonda district recorded the maximum number of 55 deaths, followed by Khammam district at 43 and Mahabubnagar district at 23, she said. In Hyderabad, two persons have died due to heatwave.

The toll is registered from April 15 in Telangana, the official said.

There was no respite from blistering heat in the desert state of Rajasthan, where Jaisalmer and Sriganganagar districts remained the hottest places recording a maximum of 45.6 degree Celsius.

Kota recorded a maximum of 45.5 degree Celsius while Bikaner and Barmer registered temperatures of 44.6 and 44.2 degrees Celsius respectively.