The Peoples Democratic Party president also appealed to the prime minister to follow the steps of late PM Atal Bihari Vajpayee to revive the peace process between India and Pakistan. 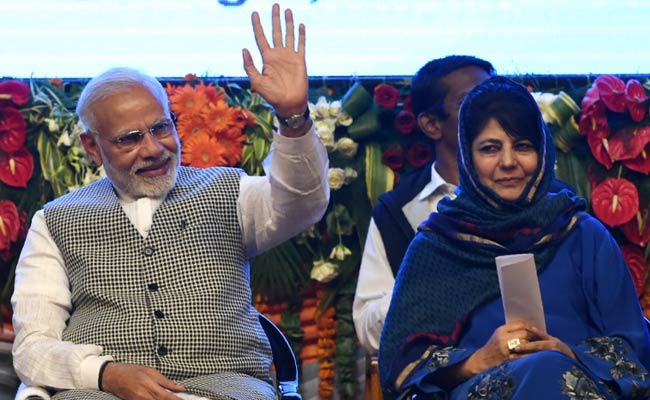 Terming resumption of dialogue between New Delhi and Islamabad as "inevitable" for peace in south Asia, former Chief Minister Mehbooba Mufti on Tuesday appealed to Prime Minister Narendra Modi to extend the hand of friendship to his Pakistani counterpart Imran Khan.

The Peoples Democratic Party president also appealed to the prime minister to follow the steps of late PM Atal Bihari Vajpayee to revive the peace process between the two neighbours.

Urging Prime Minister Modi to extend the hand of friendship to Pak PM Imran Khan and pick up the peace process from where Atal Bihari Vajpayee had to leave it, Ms Mufti said, "It will usher a new era of growth and tranquillity in the two countries."

Mehbooba Mufti said opening new roads between "divided Jammu and Kashmir" and strengthening the people-to-people contact would lower the tensions on both sides.

Terming dialogue and reconciliation between India and Pakistan as "inevitable for the resolution of the Kashmir issue," Ms Mehbooba said, India and Pakistan "need to rise above ego and exhibit the political astuteness to help realise the people's dream of a peaceful and tranquil Jammu and Kashmir."

Asserting that economic packages alone would not usher peace in Jammu and Kashmir, Ms Mufti said consistent and earnest efforts aimed at taking young women and men into confidence are needed "to stop them from going adrift".

"The economic packages alone are not going to resolve the issue. The roads, bridges and electricity are vital for the people, but unless there is dialogue aimed at the resolution of the conflict, no relief can be ensured for the masses," she said.

She said after the 2014 polls yielded fragmented mandate, PDP founder Mufti Mohammad Sayeed decided to form government with the BJP with "the sole motive to reincarnate the Vajpayee era" in the state.

She said that her father was confident that the reconciliation and dialogue would be initiated, and the measures taken during Atal Bihari Vajpayee's era would be replicated once again.

"However, when Prime Minister Modi addressed a rally in Srinagar on November 7, 2015, he announced the Rs 80,000 crore package for the state, but exhibited no willingness to thaw relations between India and Pakistan," she said.

"This disheartened everyone including the people who had come from far-flung areas to listen to him," she claimed.