New Delhi: India's attempt to buy a nuclear attack submarine from Russia appears to have triggered a misinformation campaign by defence lobbyists.

Yesterday, Russian news portal Kommersant reported that the Indian Navy had permitted a US technical crew into top secret compartments of India's existing Russian-built nuclear submarine, the INS Chakra, in clear violation of the terms of the contract between India and Russia. India leased this submarine in 2012 for approximately US$700 million and is in talks to acquire another.

According to Kommersant, which referred to this as "an unprecedented scandal," the incident "threatens to seriously complicate the negotiations both on the lease of the second nuclear submarine, and on other projects in the field of military-technical cooperation."

The Chakra, an Akula-2 class submarine, widely considered among the world's most sophisticated, has been leased by India for 10 years but all ownership rights reside with Russia.

Today, another Russian news portal, NEWS.ru, has debunked the account of the Kommersant and states that French lobbyists have an ulterior role in spreading misinformation to further their own chances of selling a nuclear-powered attack submarine to India. NEWS.ru quotes a source stating "there is complete confidence that the throw-in is organised by the lobbyists of France, and it's pretty high quality." According to this source, "In addition to the contract for the construction of non-nuclear boats such the Scorpene [now being inducted by the Indian Navy,] the French have a great desire to enter the Indian nuclear fleet."

France, the article states, is also aggressively trying to participate in India's programme to construct a second home-grown aircraft carrier. The first indigenous carrier, INS Vikrant is being built in Kochi using technology from a host of countries including Russia.

Defence Ministry sources have told NDTV that the timing of the media leaks is curious and comes a month ahead of the visit of the Russian Deputy Prime Minister Dmitry Rogozin where both sides are expected to work to finalise the terms of the lease for another Russian nuclear submarine of the same class.

In October last year, Russia and India had reached an agreement for India to acquire the submarine for approximately US$ 2 billion. An existing Russian Navy Akula-2 submarine would be heavily modernised before it is transferred to India on lease. That would coincide with the INS Chakra's lease ending after which it would be returned to Russia. The Russian Embassy in New Delhi has refused comment on the fresh controversy. 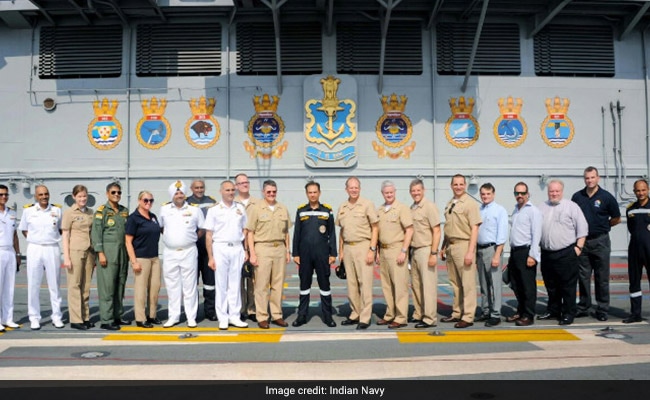 The Kommersant report also states that Russia had officially objected to the recent presence of US personnel onboard the INS Vikramaditya, India's Russia- built aircraft carrier. At the end of last month, 14 US delegates of the Indo-US Joint Working Group on Aircraft Carrier Technology Cooperation had indeed boarded the INS Vikramaditya for five hours where they witnessed the operations of the aircraft carrier including flight demonstrations by its MiG-29K fighter jets. Indian Navy officers have told NDTV that this visit was routine and did not involve the transfer of any classified information on the operations of the Vikramaditya.

Promoted
Listen to the latest songs, only on JioSaavn.com
This isn't the first time that there have been reports of the involvement of international lobbyists in influencing key Indian defence deals. Last year, The Australian newspaper revealed the leak of classified data on the Indian Navy's French-designed Scorpene class submarine, the first of which will be commissioned into the navy by the end of this year.

At the time, the French newspaper Le Monde, quoting multiple sources had said that the leak of this data was driven by competition between the French designer of the Scorpene Class submarine and a  German firm as they compete  to win international orders.