The rejection of the plea by Mukesh Singh, who had filed the mercy petition after the Supreme Court dismissed a curative plea filed by him and another convict, still leaves the three other convicts with their respective petitions

President Ram Nath Kovind has rejected a mercy petition filed by Mukesh Singh - one of the four convicts in the Nirbhaya case - mere hours after it was forwarded to him by the Union Home Ministry. The petition, which represented Mukesh Singh's final appeal before his execution, was filed Tuesday after the Supreme Court dismissed curative petitions - the last legal appeal - filed by him and Vinay Sharma, another convict.

Vinay Sharma, Mukesh Singh, Akshay Kumar Singh and Pawan Gupta were to be hanged at Delhi's Tihar Jail at 7 am on January 22, the trial court judge had declared last week, signing a death warrant seven years after a young medical student was gang-raped on a moving bus, tortured and killed.

However, on Thursday, five days before the scheduled execution, Tihar officials asked for a new date, saying the executions could not take place till after all mercy pleas were settled.

The three other convicts have yet to file their respective mercy petitions, which they may do at any time, following the rejection of which a convict is given a 14-day period of reprieve before the execution.

Two of the convicts - Mukesh Singh and Vinay Sharma - have exhausted all legal appeals against their execution; their curative petitions were dismissed by the Supreme Court on Tuesday.

The prosecution has claimed the four men are "frustrating" and "intentionally" delaying the legal process by filing curative and mercy pleas in stages to postpone their execution.

It is unclear, at this stage, if the rejection of Mukesh Singh's mercy petition means he can be executed, as the court had ordered, on Wednesday, or the mandatory 14-day period will be enforced. There are also doubts over whether all four convicts must be hanged at the same time or if they can be executed as and when their respective appeals are exhausted.

Speaking to NDTV after the President turned down the mercy plea, Nirbhaya's father said he was confident the convicts would hang as per the date set down by the court. 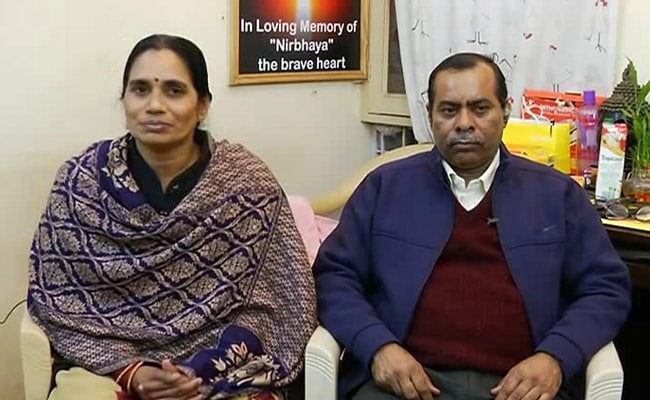 Asha Devi and Badrinath, Nirbhaya's parents, have fought a 7-year battle for justice for their daughter

"The execution date, we were told, is given with the 14-day rule in mind. Even if there is application to the President and the President rejects the plea, the execution can take place without any delay," Badrinath said.

Nirbhaya's mother, Asha Devi, hit out at the lengthy delays and politicians using the case for mileage.

On December 16, 2012, a 23-year-old medical student was gang-raped and tortured on a moving bus before being dumped on a road in south Delhi. The woman, who came to be known as "Nirbhaya", died on December 29 in a Singapore hospital.

Six men were arrested for the horrifying assault. A fifth accused -- Ram Singh -- allegedly committed suicide in Tihar Jail during the trial and the sixth man, a few months short of 18 at the time of the incident, was released after three years in a reform facility.