Jai Ram Thakur took oath as Himachal Pradesh Chief Minister On December 27, 2017 along with 11 other ministers. 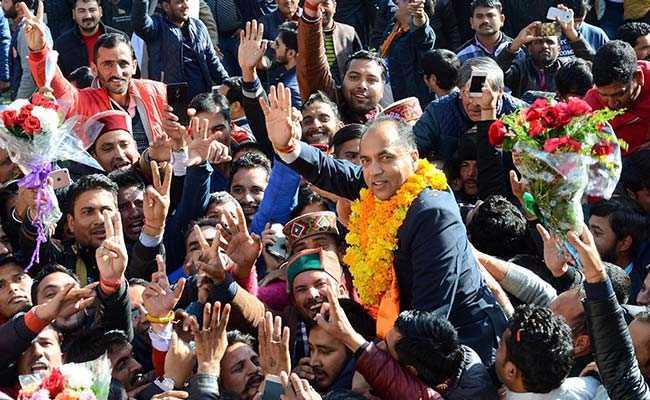 The opposition Congress will observe December 27 -- the first anniversary of the BJP government in Himachal Pradesh -- as 'Nikamma Diwas', a party leader said Sunday.

The Bharatiya Janata Party (BJP) government led by Chief Minister Jai Ram Thakur has organised an elaborate function in Dharamsala on the occasion that will be addressed by Prime Minister Narendra Modi.

Mr Thakur took oath as Himachal Pradesh Chief Minister On December 27, 2017 along with 11 other ministers. The ceremony was held on the Ridge in the presence of PM Modi and BJP chief Amit Shah.

The first anniversary of BJP government's formation will be observed as 'Nikamma Diwas of Nikammi Sarkar' as instead of doing anything concrete on the ground, it kept on making mere announcements, Mr Sukhu said.

The Congress would demand appropriate action against the BJP government by handing over documents of "scams" and "failures" of the Jai Ram Thakur government along with the charge sheet to the Governor, he added.

Mr Sukhu said the charge sheet would have specific accusations against the BJP government as he alleged that the hill-state was plagued by poor governance, RSS interference in administrative affairs and political vendetta being unleashed against political opponents.

While deteriorating law and order situation in the state was one of the biggest concerns of the Congress, the entire efforts of the BJP regime are aimed at closing cases against its leaders, Mr Sukhu alleged.

Though submitting charge-sheets against the ruling government has been a ritual practised both by the BJP and the Congress when in opposition, the Congress charge-sheet assumes significance as Lok Sabha elections are scheduled to be held within a few months.