Sharad Pawar has already appealed to opposition parties to keep aside differences and join hands to challenge the Modi juggernaut. 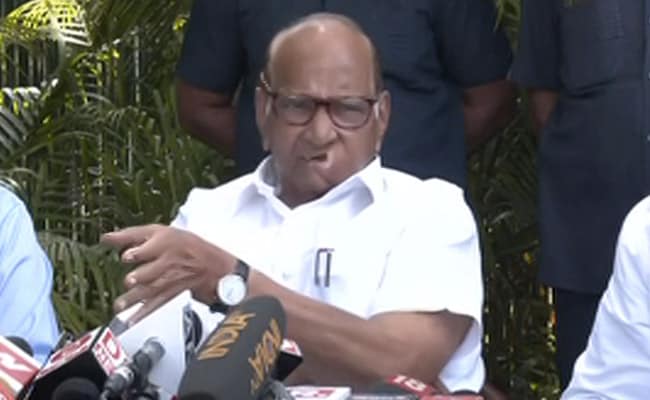 The Sharad Pawar-led Nationalist Congress Party (NCP) is holding its eighth national convention in Delhi on Sunday to send a message of opposition unity ahead of the 2024 Lok Sabha elections to take on Prime Minister Narendra Modi-led BJP.

Mr Pawar, who had surprised the BJP by forging an unlikely alliance of Congress-Shiv Sena-NCP to form government in Maharashtra after the 2019 assembly elections, has already appealed to opposition parties to keep aside differences and join hands to challenge the BJP.

The Extended Working Committee of the NCP, which is meeting here on Saturday evening, is set to adopt a set of resolutions calling for opposition unity, assessment of the economic scenario, farmers' issues, women's empowerment, which will be a critique of the Modi government's performance on these counts.

“These resolutions can be the blueprint for opposition unity,” a senior NCP leader said, adding the issues flagged by the party seek to give voice to the problems faced by the common man and cut the rhetoric promoted by the Modi government.

Sharad Pawar and top NCP leaders are scheduled to address the party's eighth National Convention at the Talkatora Stadium on Sunday.

Mr Pawar is also expected to release a booklet of the promises made by Modi to be fulfilled by 2022 such as building toilets, providing housing to all, drinking water to all and broadband connectivity to every village.

In his public interactions, the NCP supremo has been asserting that the BJP does not rule 70 per cent land mass of the country through a popular mandate, contending that it had come to power in Karnataka, Madhya Pradesh and Maharashtra by toppling the opposition governments.

According to an assessment by the NCP leadership, opposition unity was not a mirage and can be achieved by deft handling of competing aspirations and fired by a common zeal to take on Modi.

However, the challenge before the opposition was to bring competing parties such as the AAP and Congress, Trinamool Congress and Left pirates on the same table, he said.

The NCP leadership believes that K Chandrasekhar Rao's TRS too was open to some adjustments with the Congress to keep Modi away, but getting the Akali Dal and the AAP on the same page could be a challenge in Punjab.

Odisha Chief Minister Naveen Patnaik does not want to upset the BJP at the national level, but is determined not to allow the BJP to grow in the state, the NCP leader said.

The NCP is also likely to propose holding rallies in Patna, Kolkata and Mumbai to put on a grand display of opposition unity as leaders work towards a joint agenda for the 2024 elections.