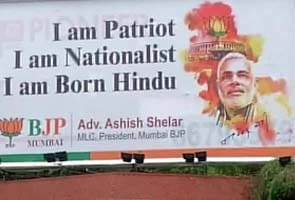 Mumbai: Days after the Bharatiya Janata Party (BJP) in Mumbai put up nearly 50 posters of Narendra Modi, headlining his "I am a Hindu Nationalist" quote, a petition has asked for Mr Modi to be barred from elections, on grounds that the posters are "communal and divisive."

Samajwadi Party leader Abu Azmi today said he has offered this argument in letters to both the Election Commission and the Chief Justice of the Bombay High Court, and asked for a ban on the posters.

Earlier this month, in a controversial interview where he used an analogy of a puppy being run over to that of the 2002 communal riots in his state, Mr Modi, widely seen as the BJP's likely candidate for prime minister, had said, "I am nationalist. I'm patriotic. Nothing is wrong. I am born Hindu. Nothing is wrong. So I'm a Hindu nationalist." (Watch)

"Such banners divide communities, how can they come from a person who wants to be Prime Minister?" asked Mr Azmi.

Promoted
Listen to the latest songs, only on JioSaavn.com
But the Election Commission has said today it cannot act on the complaint unless an election is underway in Maharashtra.

The Mumbai BJP denied any attempt to polarise voters. "We have done the campaign of Rajnathji, Advaniji and now Modiji. We will take all our leaders to voters. That is my work and that is what we will do. Governance and development is a key issue and we will campaign on that also," Mumbai BJP president Ashish Shelar had said when the posters were put up.

Counting Of Votes For Key UP Election, 6 Assembly Constituencies Tomorrow