BTS On NDTV: In this exclusive interview with NDTV's Rohit Khilnani, the band's seven members explained what they want this new album to inspire and change. 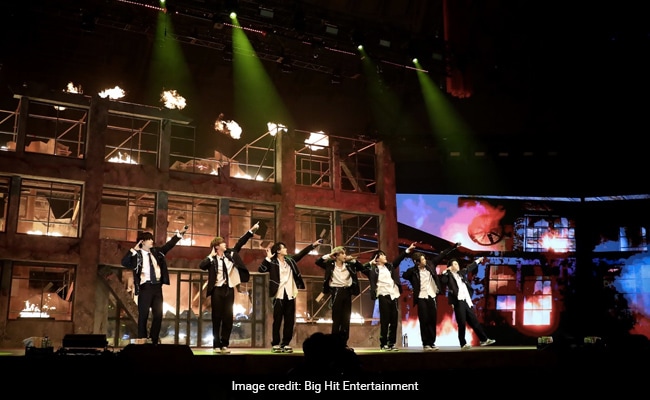 BTS Speaks To NDTV: Hit-spinners BTS will release their new album titled BE on November 20

BTS, the world's most popular boy band, speaks exclusively to NDTV about their passion and the massive following they enjoy among young fans across the world.

Hit-spinners BTS will release their new album titled BE on November 20. In this exclusive interview with NDTV's Entertainment Editor Rohit Khilnani, the band's seven members explained what they want this new album to inspire and change.

BTS, whose average age is 25, became the first Asian and first non-English speaking act to headline and sell out Wembley Stadium in 2019. The band members Jin, Suga, J-Hope, RM, Jimin, V and Jungkook were featured on the cover of Time magazine in 2018 as "Next Generation Leaders".

Here are the highlights of the BTS exclusive interview with NDTV:

We know that many fans in India send us lots of support and love. Thank you for listening and relating to our music. We think that we connect on a deeper level through music that transcends language and barriers. Even though we can't see each other at the moment, we want to tell you how thankful we are to you: BTS

First of all, thank you for the love and support, even though we haven't been there. It's crazy days these days so. I think we can't say just one thing. If the time passes by, and when these crazy things all finish then we want to be there and see all the armies in India, and have this energy together, dance together, sing together. So we want to really, say namaste, to really be there and just give our voices in person: BTS

I think more than ever, during this global pandemic, music transcends barriers, nationalities and age. It's encouraging for us to hear how our music gave some energy through a difficult period. And I think that the way to overcome this is for all of us to pull ourselves together: BTS

Our fans are of course the driving force that motivates us. We are here today because of them. For this concert, we were able to see our fans through screens and we could also hear their voices. It's been such a long time since we last saw them, so it was a very emotional and overwhelming experience. We were also thankful that so many fans joined us to enjoy the concert. With the help of technology, we could narrow the gap between us and our fans, which makes us feel comfortable with online concerts: BTS

They are all amazing things that we still can't make sense of. There could be various factors that contributed to us coming this far, maybe it's our effort or timing, but we truly believe that the love and support from ARMY made all of this possible. That's the most important thing that keeps us grounded: BTS

It depends on track by track, and case by case. For this album I can't say many, many things. But every member did their part, even lyrics, tracks, ideas. Or even fashion, covers, anything. Our members were very vocal about their opinions while working on this album. So we talked about various themes and emotions, and incorporated all of that into this album. We put ourselves a lot into this project. It's quite difficult to say who has done what. It was a collective effort where all of us did their best. There isn't a set role, and for this one in particular, all of us had a lot of input so it's hard to say who did what: BTS on what each member contributes to the band

There is no language barrier when it comes to music. We also listen to songs of various languages that we don't understand. Music is a medium that connects people. And we thank ARMY for enjoying our songs even though they don't speak the language: BTS