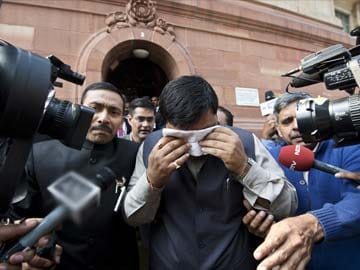 New Delhi: They streamed out, in quick succession, holding handkerchiefs to their noses. Some emerged with their eyes watering. Others were coughing. The evacuation followed a liberal spritzing of pepper spray inside parliament by law-maker L Rajagopal.  (Track LIVE updates here)

A little after 12 pm, an ambulance tore away, its siren blaring the coda to what had unfolded inside the Lok Sabha. A glass table-top had been smashed. A mic had been yanked from a table and flung.  And Mr Rajagopal, age 49, had sprung with his aerosol can in a scrum of parliamentarians fighting in the centre or the Well of the House. Reports that a knife had been pulled by an MP added to the chaos. (First pepper spray, then gas masks in Parliament: 10 developments)

Three parliamentarians were moved to hospital complaining of burning eyes. A fourth was admitted for severe chest pains.

At 12 pm, Home Minister Sushil Kumar Shinde tabled the bill that blueprints the creation of the Telangana state. Within seconds, the violence began. (Blog: A reporter's account of today's Lok Sabha violence)

The five-minute riot in Parliament was constructed by those who say they will not allow Parliament to discuss or vote on the  proposal that bifurcates Andhra Pradesh by carving out one of its three regions, Telangana, as a new southern state. The architects of today's violence were unrepentant. "Why should I apologize?" asked Venugopal Reddy, who is a member of the Telugu Desam Party. "The government should apologize for the Telangana bill," he said defiantly, while rejecting allegations that he brandished a knife during the clashes. "I pulled out a mic," he said, with a sense of accomplishment. (Watch)

Politicians opposed to a Telangana state have been bingeing on bad behaviour since this Parliament session began on February 5, but today's exhibit of total anomie is unprecedented in the history of the Indian Parliament. "They have shamed India, they have shamed us," said Speaker Meira Kumar, who later suspended 16 lawmakers for the violence. (Acted in self-defense, says L Rajagopal, the 'pepper-spray MP')

"What happened today....the Congress has to take responsibility for it," said Rajnath Singh, the chief of the main opposition party, the BJP. (Read: On Telangana, government gets no help from BJP)

The move to downsize Andhra Pradesh, designed as vote-bait before the national election by the Congress, has proven so far to be a gross miscalculation, resulting in strident dissent from its own chief minister, Kiran Kumar Reddy. Like other politicians who want the plan nixed, his constituency lies in the non-Telangana regions of Seemandhra, which will form the residuary state.

Promoted
Listen to the latest songs, only on JioSaavn.com
The Congress needs the support of the BJP to push the Telangana proposal through Parliament before it wraps on February 21. The BJP had so far suggested it would back the bill if the Congress could ensure order in Parliament to allow for a debate, and if the government made special financial provisions to help Seemandhra, which is worried about a smaller share of water, power and revenue from Telangana once the new state is created.

After today's debacle, the BJP said the government has lost the right to try and clear any legislation other than the interim budget.