Congress says restoring SPG cover to Sonia Gandhi, Rahul Gandhi and Priyanka Gandhi Vadra, and Manmohan Singh is in "national interest" and the government must rise above partisan politics. 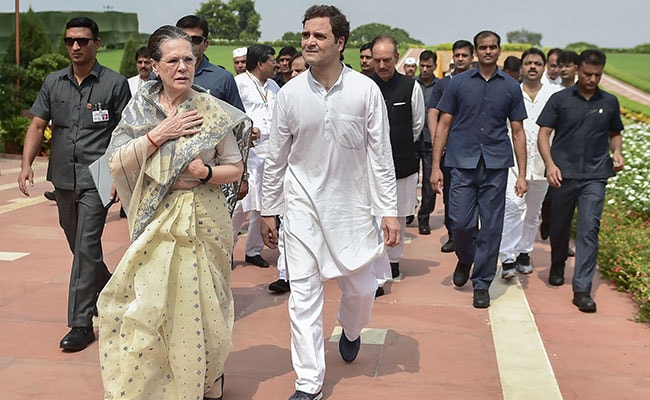 The Gandhis have now been given z-plus security by the Centre. (File)

Amid Congress protests in parliament against the government's move to withdraw SPG security cover to the Gandhi family and former Prime Minister Manmohan Singh, the Home Ministry has reportedly said the "matter is closed". Top home ministry sources said there is "no going back on the decision, the Congress can keep asking."

The Congress protests, which led to disruptions in the Lok Sabha on Tuesday, continued in the Rajya Sabha today.

Restoring SPG cover to Congress president Sonia Gandhi, her children Rahul Gandhi and Priyanka Gandhi Vadra, and Manmohan Singh is in "national interest" and the government must rise above partisan politics to do so, Congress leader Anand Sharma said in the upper house, citing a threat to their life, personal safety and security.

"Please rise above this and review and restore. That would be in the national interest as otherwise the intention would be questioned today, tomorrow and in the future," said Anand Sharma. After the government's move, Prime Minister Narendra Modi is the lone SPG protectee in the country.

The BJP's JP Nadda said there was "nothing political" about the decision. "There is nothing political, security hasn't been withdrawn. Home Ministry has a very set pattern and there is protocol. It is not done by a politician, it is done by the home ministry and according to the threat perception, the security is given and withdrawn," said Mr Nadda, working president of the BJP.

The government has been saying the decision is based on the Home Ministry panel's reassessment of the security threats to the Gandhis.

SPG, a crack commando force, comes with armoured vehicles, 24-hour protection at home and an Advance Liaison Team that screens places that the protectees will visit. The Gandhis have now been given Z-plus security, which means they will be guarded by far less security personnel and the Delhi Police.

The Gandhis have now been assigned Tata Safaris of 2010 vintage; under SPG protection, Sonia Gandhi and Priyanka Gandhi Vadra were using Range Rovers with Ballistic Resistance and Rahul Gandhi was using a Fortuner. Former Prime Minister Manmohan Singh has been given an armoured BMW car from the SPG pool.

The SPG was set up for the security of prime ministers and their families in 1985, a year after Indira Gandhi was assassinated by her bodyguards.

After the assassination of Rajiv Gandhi - Rahul Gandhi's father - the SPG Act was amended to provide security to former PMs and their families for 10 years.