The official said only five per cent of the deaths of big cats had occurred due to poaching or in man-animal conflicts. 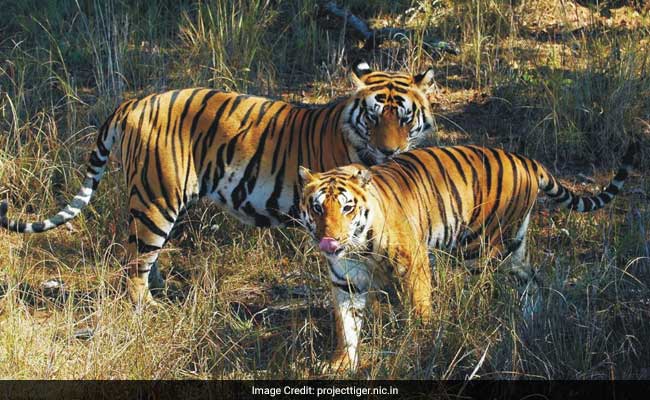 Most tigers died in territorial fights or due to natural causes, the official said (Representational)

Madhya Pradesh has lost 290 tigers over the last 19 years, but the central Indian state still has more than 675 tigers, including 125 cubs, in the designated reserves and in the wild, a top Forest department official said on Monday.

Claiming that the population of tigers has actually "gone up", he said Madhya Pradesh will continue to remain the "tiger state of India".

However, there are 550 big cats in tiger reserves in Kanha, Bandhavgarh, Pench, Satpura, Panna and Sanjay Gandhi reserve and in the wild, he said, adding that there are 125 cubs in the parks.

Mr Kumar said about 10 to 20 more tiger cubs might be roaming in the wild.

"They can't be captured as they might be deep inside the jungles. When they turn young and venture out, we would be able to see them," he added.

Mr Kumar said movements of tigers were recorded through camera traps, patrolling and other means.

Asked about the deaths of 290 tigers since 2002, Mr Kumar said, "As the number of tigers has risen, they are fighting for territorial control. We are losing 25 to 30 striped animals every year. Of them (the tigers dead), 95 per cent were weak and old. While the remaining five per cent of (290) tigers were killed by poachers or in man-animal conflicts".

Asked whether territories of the majestic beasts have shrunk due to encroachments, he said, "We do have an adequate area for tigers".

Mr Kumar said there was no talk on increasing the area for the striped animals.

"The habitat of tigers needed to be protected, and for this people need to be made aware as well," he added.

Mr Kumar said the typical lifespan of a tiger living in a reserve is 12 to 13 years.

Responding to a query, he said Madhya Pradesh will continue to remain the tiger state of India.

He said the state government should take utmost care to conserve its "tiger state" status so that it does not lose out on tourists and thus revenue.

"We don't have many big industries in Madhya Pradesh. So each tiger counts for us," he said.

He said that economy of Panna region had been adversely affected in 2005 when the population of big cats dwindled in the Panna Tiger Reserve in 2005.

Earlier, Madhya Pradesh had lost the ''tiger state'' tag to Karnataka in the all India tiger estimation exercise for 2010, primarily due to alleged poaching in the Panna Tiger Reserve.

That time, Madhya Pradesh had 257 tigers compared to 300 in Karnataka.

In the 2014 tiger census, it slipped to third position in the country with a population of 308 striped animals, after Uttarakhand (340) and Karnataka (408).

The central Indian state regained the top slot in the 2018 Census with a population of 526 tigers, two more than Karnataka.