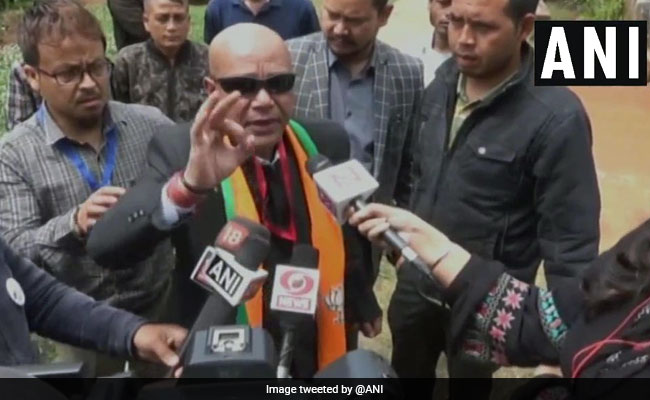 Sanbor Shullai allegedly tried to address the media inside the polling station.

The BJP candidate for Meghalaya's Shillong Lok Sabha seat Sanbor Shullai has once again landed in controversy. On Saturday, election authorities filed a police complaint against him for allegedly misbehaving with polling officials and violating the model code of conduct.

The First Information Report or FIR was filed by the Returning Officer and the President Officer of Sankerdev College polling booth at Laban in Shillong.

The BJP candidate had earlier made headlines after announcing that he would "commit suicide" if the Citizenship (Amendment) Bill - which his party is pushing for and is widely opposed in the northeast - is enacted.

According to official sources, the FIR was filed under Section 132 of the Representation of the People Act for alleged misconduct inside a polling station in Shillong as he addressed the media from within it.

Sources added that Mr Shullai went to the polling station close to Sankardev College on Thursday, the day of the first phase of voting for the seven-round Lok Sabha elections, and tried to address the media inside the polling station.

When the returning officer objected, he allegedly misbehaved with him.

Sanbor Shullai was one of the five opponents facing sitting Congress MP Vincent H Pala in Shillong while former Chief Minister Mukul Sangma of the Congress was pitted against ruling NPP's Agatha Sangma in a three-cornered contest in Tura.

Both seats voted on Thursday and results will be declared on May 23.

In the highest voter turnout in 20 years, around 71.37 per cent of the 19.14 lakh voters of Meghalaya exercised their franchise in the Lok Sabha elections this time, state Chief Electoral Officer F R Kharkongor said.  Votes will be cast once again in one polling station.

In the matrilineal society of Meghalaya, the number of women who voted was more than that of men, the CEO said.

"We have recommended re-poll in Konarchar polling station under Selsella assembly segment after the sector officers detected a mix up of EVMs for the by-poll and the parliamentary elections. It is a human error," the CEO said.