Congress sources have indicated that Priyanka Gandhi will not contest against PM Modi because it will weaken the campaign in the rest of the state. 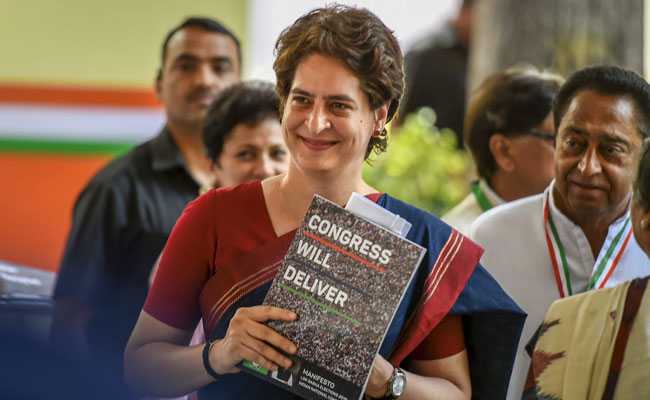 Priyanka Gandhi, 47, joined politics in January after years in the Congress backrooms. (PTI)

Whether Priyanka Gandhi Vadra will contest the national election is still in the realm of speculation but what is certain is that she will not fight against Prime Minister Narendra Modi in his Varanasi constituency in Uttar Pradesh. Buzz about a whopper contest in Varanasi peaked after reports that Priyanka Gandhi remarked to party workers during her boat campaign last month, "Why not Varanasi?"

Congress sources have indicated that Priyanka Gandhi, the party general secretary in charge of east Uttar Pradesh, will not contest against PM Modi because it will weaken the campaign in the rest of the state.

Sources feel that Priyanka Gandhi will be confined to a constituency while she needs to be seen throughout the state to "ensure the Congress party's presence is felt".

Priyanka Gandhi, 47, joined politics in January after years in the Congress backrooms and was made one of the two general secretaries in charge of the politically all-important Uttar Pradesh.

At first there was speculation that she would contest from Raebareli, her mother Sonia Gandhi's constituency in Uttar Pradesh. But the Congress's very first list of candidates for the April-May election ended that idea.

Congress workers want Priyanka Gandhi to contest because they believe it will ramp up their campaign as well as appeal in UP, a state where the party has not been a force to reckon with for decades.

UP has given the Congress some of its iconic leaders and prime ministers including Jawaharlal Nehru and Indira Gandhi (Rahul Gandhi's great grandfather and grandmother).

Congress workers have been cheering Priyanka Gandhi's political debut because they believe she has the charisma and looks of Indira Gandhi.

Uttar Pradesh will vote in all seven rounds of the election from April 11 to May 19. The results will be declared on May 23.