"Why Not Varanasi," Quips Priyanka Gandhi Vadra On Request To Fight Polls

Though contesting from Varanasi seems to be just a quick retort, Priyanka Gandhi had a day earlier said she was ready to contest elections if her party wanted. 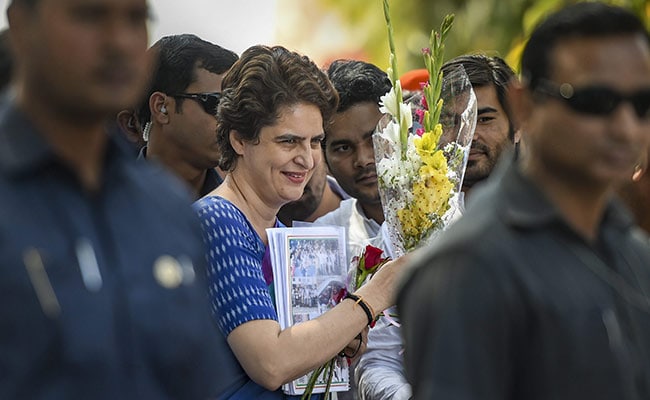 Congress General Secretary Priyanka Gandhi Vadra teased a potential showdown with Prime Minister Narendra Modi in the national elections on Thursday as she quipped "Why not Varanasi" - the Lok Sabha constituency of the PM - when party workers requested her to contest elections from Rae Bareli, her mother Sonia Gandhi's parliamentary constituency.

Priyanka Gandhi, while meeting Congress workers in Rae Bareli on Thursday, had said her mother was tense as she could not come meet them herself, to which some workers asked her to contest from Rae Bareli instead.

"Why not Varanasi?" she asked, smiling, reported news agency IANS.

Priyanka Gandhi, Congress in charge of eastern UP, also said that she had told her mother not to worry as she would look at the work of her constituency.

Though contesting from Varanasi seems to be just a quick retort, Priyanka Gandhi had a day earlier said she was ready to contest elections if her party wanted.

"If my party wants me to contest polls then I will definitely do so," the 47-year-old had told reporters on Wednesday while campaigning in Amethi, her brother and Congress president Rahul Gandhi's constituency.

Priyanka Gandhi joined politics in January after years in the Congress backrooms, with only a guest role in the party's campaigns, that too confined to the two Gandhi family constituencies.

When she was appointed the Congress's in-charge of eastern UP, there was speculation that she would contest from Rae Bareli and Sonia Gandhi, the former Congress president, would retire. However, Mrs Gandhi's name was featured alongside Rahul Gandhi in the first list of candidates released by the Congress.

Congress workers believe that Priyanka Gandhi contesting the polls can significantly lift the party's fortunes. Many of them believe Priyanka, with her striking resemblance to grandmother Indira Gandhi, is a sure-shot hit with the masses.

The buzz has been kept alive by Priyanka Gandhi's increased public appearances, the frequency of her chats with the media to field attacks from the BJP and Mayawati and her recent three-day boat campaign on the river Ganga that ended in Varanasi.

Uttar Pradesh will vote in all seven rounds of the election from April 11 to May 19. The results will be declared on May 23.