The National Democratic Alliance may end up winning 38-39 of the 40 seats in Bihar, the BJP leader said. 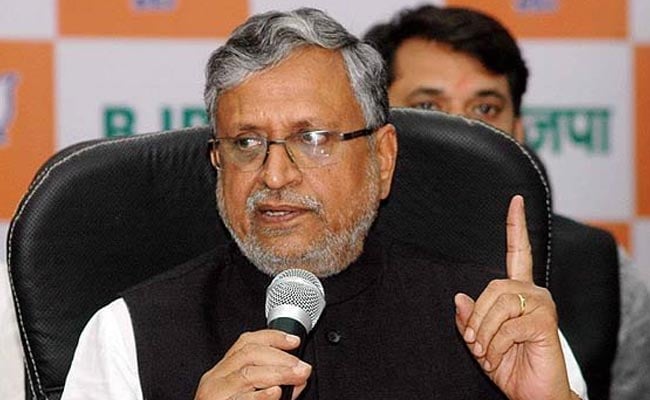 The RJD won only four seats in 2014 when Lalu Yadav led its campaign, said Sushil Modi.

Bihar Deputy Chief Minister Sushil Kumar Modi today said the presence of jailed RJD chief Lalu Prasad Yadav in the Lok Sabha campaign would have "better suited" the NDA as he symbolises "jungle raj" for voters, and claimed the saffron alliance will better its 2014 tally of 31 in the state this time.

The National Democratic Alliance may end up winning 38-39 of the 40 seats in Bihar, the BJP leader said.

The combine for the first time includes Chief Minister Nitish Kumar's JD(U) and Union minister Ram Vilas Paswan's LJP while the opposition alliance has "tried, tested and failed" leaders and is marred by "sabotage and rebellion", Sushil Modi told PTI in an interview, explaining the rationale for his poll prediction.

The Janata Dal-United and the Lok Janshakti Party have been BJP allies in earlier polls as well but this is the first time they are together in the same camp.

Describing Kumar as "the face of the NDA campaign" in Bihar, Sushil Modi said the alliance will benefit from the work done by the Prime Minister Narendra Modi-led central government as well as the state dispensation, unlike in 2014 when it was not in power in either of the places.

The BJP leader's barb at Yadav comes in the backdrop of the RJD leader''s son Tejashwi Yadav making his father's incarceration one of the themes of his campaign, alleging a "conspiracy" due to the former Bihar chief minister''s vehement opposition to the saffron party.

The RJD won only four seats in 2014 when Lalu Yadav led its campaign, Sushil Modi said, asserting that the NDA would have preferred him to be outside jail.

"We wish he had got bail... To the people of Bihar, he symbolises ''jungle raj'', anarchy and lawlessness... the more he would have campaigned against us, the more polarisation of voters would have occurred in our favour. He suits us better outside jail and would have politically benefited us," Sushil Modi said.

The NDA's theme of nationalism built around the air strikes in Balakot, Pakistan, has made a massive impact, he said, noting that "people go crazy" with adulation in its rallies when leaders speak of PM Modi's strong leadership and how India is taking on Pakistan and China under him.

While issues, including those related to the central and state government's development works, have resonance on the ground, the opposition campaign has no traction, he said.

"What are the issues they are raising? That the Narendra Modi government is a threat to the constitution and reservation, that my father (Lalu) has been falsely implicated, that Nitish Kumar is ''paltu ram'' (takes U-turn). These have no connect on the ground," Sushil Modi said.

The Congress' promise of Rs 72,000 to poor families annually and allegations of corruption in the Rafale deal are also not part of poll discourse as the party has no campaigner barring its president Rahul Gandhi, he added.

Asked about opposition criticism that the BJP is using the nationalism plank to avoid discussing substantive issues like jobs, Sushil Modi said opposition parties are unable to make a sensitive issue like price rise an election topic this time because of the government''s capable handling of the economy.

He claimed there is a wave-like situation in the prime minister's support, saying people had only heard of PM Modi in 2014 but have now found him much better after experiencing his rule for five years.

"I can't see a single issue in the opposition's favour. With both Nitish Kumar and Ram Vilas Paswan with us, our vote gap over the opposition should be now more 16-17 per cent. In such a case, anything can happen. We will certainly win more seats than the last time and may end up winning 38-39 seats," he said.

While the NDA has been running a united campaign with its key leaders often holding joint rallies, the opposition's campaign has been marred by lack of coordination, sabotage, rebellion and one-upmanship, he claimed.

Sushil Modi said Tejashwi Yadav and Rahul Gandhi have concentrated on campaigning for their own party's candidates. Tejashwi Yadav joined Mr Gandhi at a rally last week for the first time after it became a big media issue.

In some seats, such as Madhubani and Supaul, opposition candidates have been hit by rebels while many of its allies like Upendra Kushwaha-led RLSP and Mukesh Sahni's Vikassheel Insaan Party have given tickets to "non-entities", causing disaffection among supporters, he claimed.

The BJP leader was dismissive of the influence of Kushwaha and Jitan Ram Manjhi, both of whom were BJP allies in 2015 Bihar assembly poll and have joined hands with the opposition.

The NDA has consistently defeated the RJD-led opposition alliance in Bihar by a big margin for last many Lok Sabha polls barring 2004, the BJP leader said, adding that its vote share may even cross 50 per cent this time.

"I have not even one per cent doubt that the BJP will again get a majority on its own in the Lok Sabha polls," he said.

Nineteen of Bihar's 40 seats have gone to the polls in four phases so far. The BJP, JD(U) and LJP are contesting on 17, 17 and six seats, respectively. They had won 22, two and six seas, respectively, in 2014 when Kumar''s party had fought independently while Paswan was a BJP ally.

Mr Kushwaha's RLSP was then a part of the NDA and won three seats. He is in the opposition's camp now.