"It's Serious, Smriti Irani's Nomination Should Be Cancelled": Congress On Degree Row

Smriti Irani on Thursday declared in her poll affidavit that her three-year degree course was "not completed". 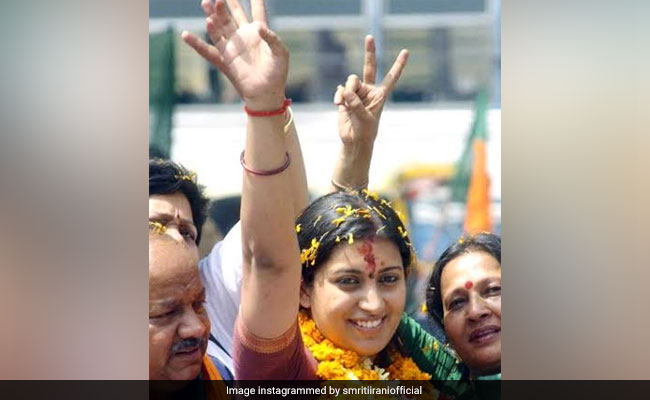 Attacking Union Minister Smriti Irani over her educational qualification, the Congress today alleged that the BJP leader has submitted contradictory affidavits to the Election Commission, and asked for her nomination for the Amethi Lok Sabha seat to be cancelled. The Congress said that the discrepancy in Ms Irani's affidavit is a serious matter and "corrupt practice".

"This isn't a joke, this is serious matter. People are being fooled. This is a corrupt practice, her nomination should be cancelled. One who can fool democracy, does she have the right to get elected? BA, BCoM, Yale... Modiji, save the nation later, inform on your and Smriti's degree first," Congress spokesperson Randeep Singh Surjewala said.

Yesterday, Smriti Irani had declared in her poll affidavit that her three-year degree course was "not completed". She made the same declaration in her 2017 affidavit to the Rajya Sabha, where she is a member.

But in the 2014 election, when the Union Minister fought from Amethi for the first time, she had only said: "Bachelor of Commerce Part-1, School of Open Learning (Correspondence) University of Delhi, 1994".

In 2004, when she contested from Delhi's Chandni Chowk against Congress leader Kapil Sibal, her affidavit only said B.A. or Bachelor of Arts, 1996, Delhi University (School of Correspondence).

"We have no issue with the fact that Smriti Irani is not a graduate. The issue here is that she has lied repeatedly on oath and to the courts. People of India will see through these lies and give a befitting political reply to a ''serial liar''!" she said.

Ms Irani shot back, saying, "No matter what you say, the more you harass me, the harder I will work in Amethi".