Smriti Irani has been accused by the Congress and other opposition parties of providing contradictory information on her education.

Union Minister Smriti Irani, who is contesting as a BJP candidate in Uttar Pradesh's Amethi against Rahul Gandhi, on Thursday declared to the Election Commission that she is not a graduate. This is the first time that she makes it clear in her poll affidavit that her three-year degree course was "not completed".

In the category of Highest Educational Qualification, Smriti Irani says "Bachelor of Commerce Part-1" from the School of Open Learning (Correspondence) University of Delhi. The year is 1994, which means she joined the course that year but did not complete it. "Three year degree course not completed," is written in brackets. 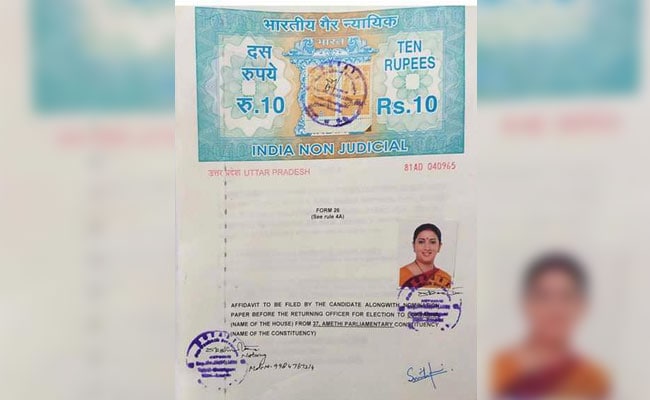 First time that Smriti Irani makes it clear in her affidavit that her three-year degree course was "not completed".

She made the same declaration in her 2017 affidavit to the Rajya Sabha, where she is a member.

In the 2014 election, when the Union Minister fought from Amethi for the first time, she had listed Bachelor of Commerce Part-1, School of Open Learning (Correspondence) University of Delhi, 1994.

Way back in 2004, when she contested in Delhi's Chandni Chowk against Congress leader Kapil Sibal, her affidavit only said B.A. or Bachelor of Arts, 1996, Delhi University (School of Correspondence). 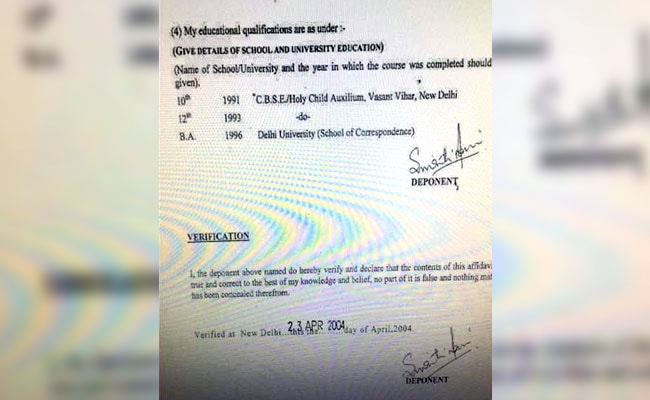 The minister today also declared assets worth over Rs 4.71 crore.

Smriti Irani has been accused by the Congress and other opposition parties of providing contradictory information on her education.

One Ahmed Khan filed a petition based on the allegation two years ago. The case was dismissed by a Delhi court, which said it was meant to "needlessly harass her". The petitioner challenged the verdict in the Delhi High Court.

In November, Congress president Rahul Gandhi, who has been challenged in his constituency Amethi for the second time by Smriti Irani, posted a tweet commenting that "under the BJP, a short-cut to ministries is open for fake degree holders."