The ruling AAP in Delhi has been campaigning for Lok Sabha polls with full statehood for the city as its main issue for the elections. 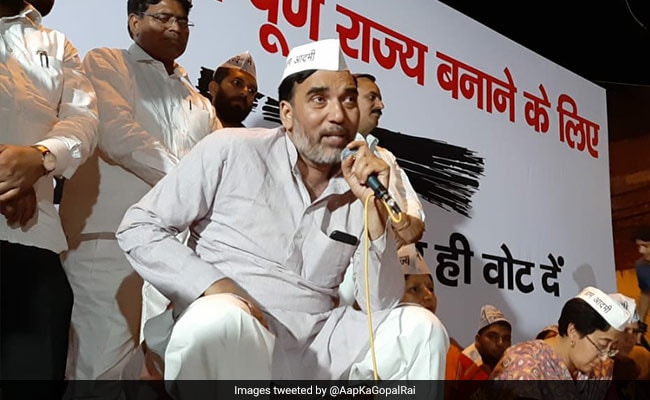 Whom is Sheila Dikshit trying to fool when it's known that statehood for Delhi will be granted: Gopal Rai

A day after the Congress ruled out making Delhi's statehood as its poll plank for the Lok Sabha election, the Aam Aadmi Party (AAP) on Wednesday asked its leader Sheila Dikshit what "are her latest compulsions" behind the U-turn on the issue.

Noting that the former chief minister had promised full statehood for Delhi when in power, senior AAP leader Gopal Rai said Ms Dikshit had argued in 2013 that Delhi faced problems in coordination between different agencies and such problems would have been resolved had Delhi been a full state.

"It is shocking that somebody who has been a chief minister of Delhi is today saying that statehood for Delhi cannot be an issue for Lok Sabha elections. If one were to believe what Dikshit is saying today then on what basis she had got a resolution passed from the Assembly and sent it to the then central government for getting this demand fulfilled?" he said.

"Whom is Sheila Dikshit trying to fool when it is known to everyone that statehood for Delhi will be granted by the passage of a Constitution amendment bill in Parliament? If an issue to be decided in Parliament is not an issue for Lok Sabha elections then what will be the issue?" he added.

Ms Dikshit had on Tuesday said the Congress would contest the April-May Lok Sabha polls on national issues and full statehood for Delhi was not in its list of issues to be taken up during campaigning.

The ruling AAP in Delhi has been campaigning for Lok Sabha polls with full statehood for the city as its main issue for the elections.

Ms Dikshit maintained full statehood was not possible and the issue would not figure in the party's manifesto for Lok Sabha polls.