Kashmir Floods: As Tempers Flare, Some Army Vehicles Pelted With Stones in Srinagar 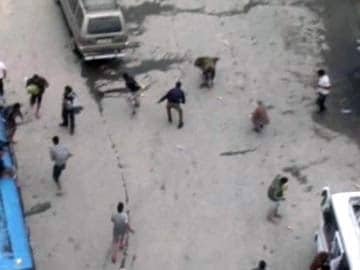 Stranded locals claim that relief supplies are taking too long to reach them.

Srinagar: Anger boiled over today among the residents of Srinagar after being stranded for days in the flooded city. They directed their frustration and rage at the armed forces whose troops have been working around the clock in a tireless mission that has so far brought nearly 80,000 people to safety. (Kashmir Floods: Communication and Connectivity the Biggest Challenge, says Army Chief)

Army vehicles were pelted with stones as they tried to make their way through the city, loaded with supplies including water and food. A group of spare boats kept on stand-by for soldiers were grabbed by a mob. In the morning, four Air Force helicopters with relief material could not land at the helipad at the Governor's residence after threats of stoning from people who thought VIPs were the intended beneficiaries. (SOS Messages From Those Stranded)

Army Chief General Dalbir Singh Suhag, reiterated, "We understand people can be upset. The army will remain on the job till the last man is rescued."

"Aggressive crowds mean we are facing difficulties in rescue work," said OP Singh, the chief of the National Disaster Response Force or NDRF, which is working on emergency rescue operations with the armed forces. (J&K Floods: Here's How You Can Help)

But residents who have been rescued say relief supplies are taking too long to reach them. And thousands remain marooned on the roofs of their houses for the fourth day in a row.  Phone networks, knocked out by the worst floods in the region in over a decade, are still patchy, adding to the tension for families desperate for information about missing relatives. (Russian Women Show the Way, Ask Army Men to First Rescue Needy)

Promoted
Listen to the latest songs, only on JioSaavn.com
On Wednesday it emerged that one rescue officer had been wounded earlier in the week. The NDRF chief told NDTV an "aggressive crowd" had tried to attack a rescue boat, injuring the officer.

Refuting allegations of VIPs being helped first, Chief Minister Omar Abdullah said, "Two of my uncles are stuck in the floods and I haven't evacuated them."