Delhi Police, who have been criticised for their conduct during the clashes, allegedly barged into the Jamia campus and assaulted students on campus, leading dozens away with their hands over their heads.

Hundreds of Jamia Millia Islamia students broke the lock on the main gate and barged into university office premises today to surround Vice Chancellor Najma Akhtar's residence, forcing her to emerge and confront a mob that demanded a FIR be registered against Delhi Police in connection with the last month's violent clashes. In visuals of the confrontation, Ms Akhtar can be seen standing in the middle of a sea of students chanting "FIR, FIR", while she explains that attempts were being made to file a complaint.

The protesting students also demanded the university postpone their examinations - which the Vice Chancellor agreed to, asking a representative from the students union to coordinate with the Dean to work out new dates. They also sought assurances over their safety on campus, to which Ms Akhtar said security guards had been doubled.

"We are doing everything possible from our end. We have made security arrangements at all places," she told the students, according to news agency IANS.

The entire interaction, although noisy and tumultuous, was conducted peacefully, with some students heard urging calm and order while others posed questions to Ms Akhtar.

The focus of the students' agitation was the violence that broke out on the Jamia campus late on the night of December 15. Earlier that day, a peaceful protest by students opposed to the citizenship law ended in a battle with the cops in a posh South Delhi neighbourhood.

The violence led to the torching of public buses and police vehicles and left around 60 people, including both students and police officers, injured. 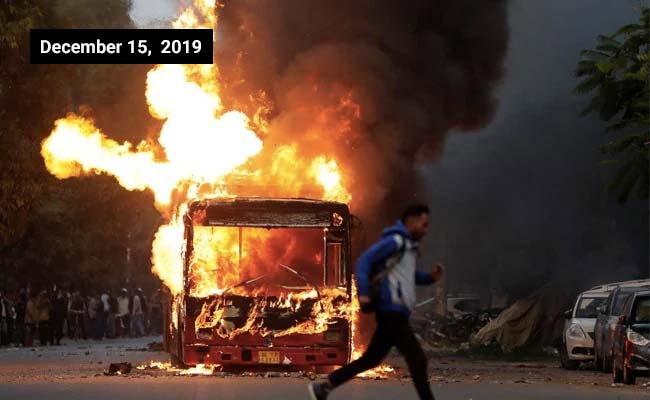 Two days later Delhi Police, who have also been criticised for their conduct during the violent mob attack on JNU faculty and students on January 5, arrested 10 people in connection with the Jamia incident.

The cops also said that those arrested did not include Jamia students - although they did not give a clean chit - and speculated that "anti-social elements" from the Jamia and Okhla areas of the national capital - which border the university - may have caused the violence.

Delhi Police, who have been criticised for their conduct during the clashes, allegedly barged into the Jamia campus once the violence broke out and assaulted students on campus, leading dozens away with their hands over their heads.

Disturbing videos and photographs of the violence emerged on social media the following day, showing blood stains in the university library. Some videos showed students running for cover as what sounds like gunfire and windows shattering can be heard.

Ms Akhtar had earlier hit out at the cops in the aftermath of the attack, saying she "was hurt by the way my students were treated". The Vice Chancellor then told her students they were "not alone in this fight... I am with them".

Last month the university sent a formal report to the Union Home Ministry, under whose control Delhi Police rolls up. However, ministry sources told news agency PTI that "no formal request" had been made about an inquiry into Delhi Police's actions.