Minajhuddin was the young man seen unconscious, with blood on his head, in a corner of a bathroom in one of many videos that have gone viral since the police crackdown on Jamia Millia Islamia students protesting the new citizenship law

Ten people have been arrested for the violence near and in Jamia Millia Islamia; none are students

Three days after cops barged into Delhi's Jamia Millia Islamia and lathi-charged students inside the university's central library, one of the students has lost sight in his left eye. Minahjuddin, 26, a final-year LLM student who was studying in the library's MPhil section, said tudents were attacked by a group of 20-25 "fully armed" policemen in riot gear and wielding lathis. "They (the cops) burst in and started beating everyone with lathis... they hit me too. They hit me on my hand and fractured my finger and then on my eye. I tried to run away... I hid in the toilet, where I fell bleeding and unconscious".

"I was studying in the central library - there is an MPhil section. We were told cops had entered the library. Then, where we were sitting, between 20 and 25 fully armed policemen with helmets and lathis burst in and started beating everyone," Minjahuddin, whose left eye is still swollen, said.

"I was lying there (in the bathroom) bleeding... some friends took me to a hospital. I was referred to AIIMS Trauma and then to Rajendra Prasad Eye Institute, where I was treated. I was in critical condition. Doctors say visibility in my right eye could also be affected," he said.

Minajhuddin was the young man seen unconscious, with blood on his head, in a corner of a bathroom in one of many videos that have gone viral since the horrific incident. 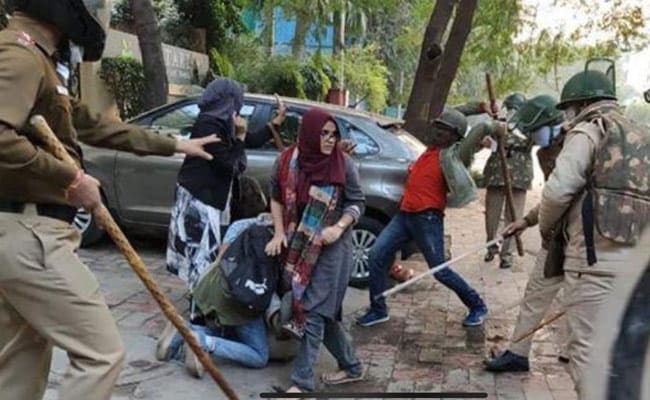 In other shocking videos - that emerged on Monday - Jamia students inside the library can be seen running for cover as what sounds like gunfire and windows shattering can be heard. Chairs and books are seen scattered and a tear gas shell can be seen on the floor.

"I was present in the library at the time. Police threw two-three tear gas shell at students," a university official told NDTV. In the video a student can be heard saying: "Please switch on the fan" as tear gas fills the room.

Another student who spoke to NDTV said she had been forcibly taken from a library inside campus for detention. Unsettling visuals of students being rounded up and marched away with hands over their heads also went viral on the internet. 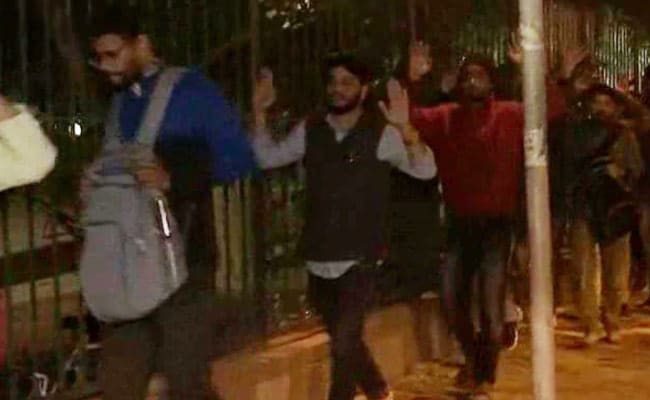 Delhi Police, who have been accused of excessive force and questioned over the possible use of firearms, have also been criticised for entering the Jamia campus without permission.

They have denied both charges and have said they only entered the campus after the mob went inside. "We were checking from where these violent activities were taking place," senior police officer Chinmaya Biswal told NDTV.

Sources within the Home Ministry, citing a Delhi Police report, also said cops had not opened fire. However, on Monday two were admitted to the government-run Safdarjung Hospital with bullet injuries.

Trouble on Sunday began after what started as a peaceful protest against the new citizenship law ended in a pitched battle between Delhi Police and a violent mob; the cops privately admitted the protest may have been hijacked by local thugs.

On Tuesday ten people, most of whom have criminal backgrounds, were arrested and sent to 14-day judicial custody in connection with Sunday's violent clashes involving Jamia students, a local mob and Delhi Police. No students have been arrested so far.