Jamia university has become the heart of protests that swept campuses across the country over the new law that came into force last week.

Students inside the library are seen covering their mouths as smoke from tear gas fills the room.

Students inside Delhi's Jamia Millia Islamia University are seen running for cover inside the library as loud firing and the shattering of what appeared to be windows is heard in a video that emerged today, highlighting the gravity of the Sunday evening's violence over the citizenship law. Jamia university has become the heart of protests that swept campuses across the country over the new law that came into force last week. Around 100 students of the university were detained yesterday and released around 3:30 am today.

In the video posted on social media, students inside the university library are seen covering their mouths as smoke from tear gas fills the room. "Please switch on the fan," a student is heard saying.

One student is heard requesting others not to create panic amid the commotion.

"They are beating us mercilessly," another student is heard replying to him.

The protests were underway at the campus, right behind the library but students maintain they were democratic in nature.

The trouble started Sunday evening after a protest march by the students ended in a pitched battle with the police, vandalism and torching of vehicles. 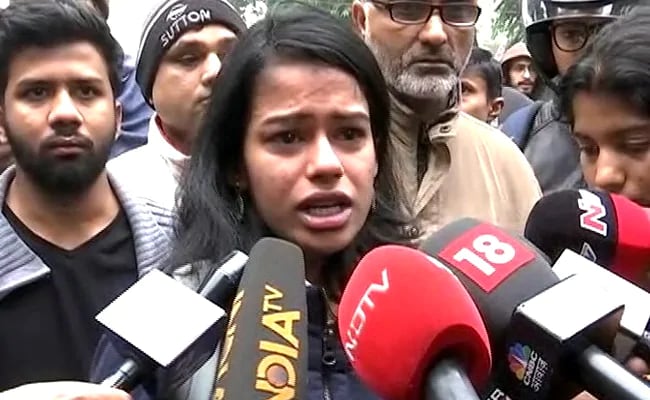 Jamia Millia Islamia protests: "We cried all night. What is happening," a Jamia student said.

The police later barged into the university and detained around 100 students.

One of the students who spoke to NDTV said she had been forcibly taken from a library inside campus for detention.

"Police have entered the campus by force, no permission was given. Our staff and students are being beaten up and forced to leave the campus," Waseem Ahmed Khan, Chief Proctor of Jamia, was quoted as saying by news agency ANI.

Police, however, maintain that they entered the university only after the violent mob went inside and started throwing stones. "We were checking from where these violent activities were taking place," senior police officer Chinmaya Biswal told NDTV.

Violence had hit many parts of the country, particularly West Bengal and the northeast since the citizenship law -- meant to facilitate grant of citizenship to religious minorities from Pakistan, Afghanistan and Bangladesh living in India -- was passed. The violence initially began in Assam where three people were killed and several injured in police firing after thousands took to streets in defiance of curfew.